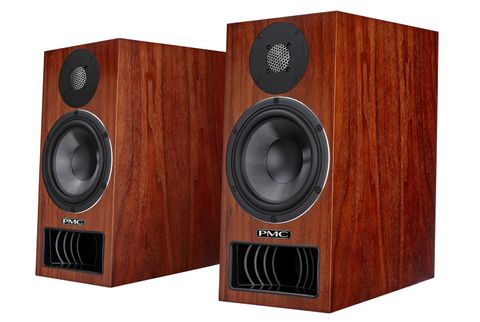 With their superb clarity, speed and enthusiasm, these stylish speakers are hugely impressive

They are part of the new PMC Twenty5 range, built to celebrate the company’s 25th anniversary and boasting a complete upgrade on the popular PMC Twenty series, which continues on as the entry-level range.

From new drivers and crossovers to a brand new technology, PMC has pulled out all the stops to make sure these £2450 stereo speakers are the best they’ve ever been.

While we’re inundated with plenty of smart-looking speakers, the PMC Twenty5.22s are just cool. Maybe it’s the glint of metal surrounding the mid/bass driver.

Maybe it’s the mirrored panel at the back of the speakers, with new single-wired terminals that are satisfying to plug into.

Or maybe it’s that menacing-looking vent, which looks like something borrowed from a Formula 1 car.

We’ve always been huge fans of the company’s slim, slanted design, but PMC has now looked towards F1 for inspiration on aerodynamics, and applied those principles to the Twenty5 range of speakers.

Called Laminair, the vented port works alongside PMC’s signature ATL (advanced transmission line) technology, essentially an alternative reflex port which forces the backwards energy of the mid/bass driver through a damped pathway within the speaker and out of the front port, absorbing all but the lowest frequencies as it does so.

As this low-end energy leaves the front port, it reinforces the driver’s forward output, resulting in more powerful bass. That's the theory at least, and it’s PMC’s crowning glory.

Laminair is the jewel in that crown. It streamlines the effect of the ATL, smoothing the airflow and ironing out the mini turbulences that occur as the air leaves the port. The result? A cleaner, more efficient airflow that gives you taut bass and better timing.

Also new on the Twenty5.22 is the cone of the mid/bass driver, now a stiffer glass fibre and pulp hybrid material called g-weave, while the magnet and motor system has been made 80 per cent more powerful than the Twenty.22.

The dome tweeter’s metal grille has been tweaked to help disperse sound better and the speaker dimensions have been subtly adjusted.

Thanks to these improvements, the PMC Twenty5.22 speakers are enjoyable right from the start. Their enthusiastic and speedy character comes across immediately.

Wyclef Jean’s Thug Angels depends on a strong bassline and insistent beat, and the PMCs charge through the song without losing breath, a tightly controlled and precise delivery.

There’s depth and texture to the bassline, but more impressively, its shape is defined in a way we’ve never heard before at this price.

Hans Zimmer’s Coward from the Interstellar soundtrack fully shows off the PMCs’ talents. The metronomic ticking is crisp and snappy, there’s a sense of build up, and the treble has just enough shine to keep you on edge.

It’s that low, pulsing heartbeat that captivates us. Its edges are stunningly defined, and the PMC does a wonderful job of outlining the very shape of that deep note.

What strikes us most is how remarkably clean the sound is. Each note is pristine.

You can almost see the shape of every instrumental strand – the outline of the rough, springy bass strings, the taut twang of the guitar, the smack of the drum hits, the nuanced vocals.

Compared with the ATC SCM19 speakers – the class-leaders at this price – the PMCs have superb timing, clarity and definition. But that fast, exciting character can be a touch too much at times.

That heartbeat in Interstellar? PMCs get the precise shape of the notes across, but that feeling of dread comes across more easily from the ATCs, which have subtler dynamics and greater weight on their side and actually make it sound scary.

You can add a touch more heft to the PMCs by a bit of careful system matching. We’d recommend something bold like the Roksan Caspian M2 amplifier to inject some richness to the speedy PMCs.

On the plus side, the Twenty5.22s are completely unfussy when it comes to positioning.

Giving some space around them definitely helps, but whether they’re close together or far apart, toed-in or not, the PMCs have a great spread of sound and don’t lose that energy or directness.

MORE: 6 of the best stereo amplifiers

It’s not entirely fair to compare the PMCs with the ATCs. There’s a difference in balance and presentation – and a £500 price gap between the two – but we find the ATCs a more comfortable, emotive listen.

That doesn’t take away from how enjoyable the PMC Twenty5.22 speakers are. If we could fuse the two, it’d be the perfect pair of speakers.

Even so, we can’t deny how much fun we had with them. The upgraded technologies have made a considerable impact, and they’re such an attractive pair of speakers we want to take them home immediately.

They’re superb speakers for the money, and we urge you to give them a listen.