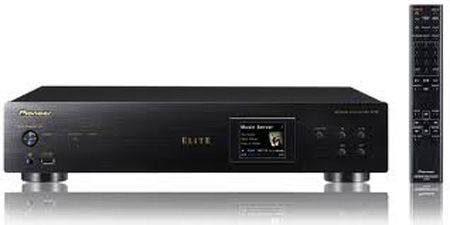 Product of the Year, Awards 2013. A storming debut, the Pioneer N-50 is a streaming superstar

The Pioneer N-50 network audio player shows that, while the company has been watching carefully from the sidelines while rivals have launched their streamers, its engineers have clearly been taking note – the N-50 pulls no punches.

This looks and feels like a quality item, styled to match Pioneer’s current and upcoming hi-fi separates. Solid, and superbly finished, the unit more than justifies the £500 asking price.

The unit’s black brushed aluminium face-plate gives a modern, minimalist appearance, and there’s just a small collection of control buttons. By the way, this is the N-50-K version, the K being for 'kuro' (or black) – the player's also available in silver as the N-50-S (below).

Invariably, your attention's going to be drawn to the 2.5in colour LCD display: this high contrast screen looks great and manages to cram in album artwork, file format, sampling rate and bitrate, but it all feels like a bit of a tight squeeze, and we’d prefer a larger screen.

The remote control is a slender metal wand, which feels sturdy enough. The buttons aren’t especially suited to those of us with chunky fingers, but there’s a nice click with every press and the N-50 is quick enough to respond.

Alternatively there's a free ControlApp for iOS and Android devices, similar to the iControlAV2 app Pioneer developed for its home cinema receivers, although there's no iPad-specific version.

It offers all the basic controls, such as selecting sources and navigating NAS folders and internet radio stations, but, after a while, you notice it doesn't utilise the on-screen real estate.

When artist folders or track names are listed there's a large amount of unused space. You're shown useful information such as the bit depth and sample rate, but it assumes you know which number is the 'bits' and which is the 'kHz'.

And, while you can see the artwork on the screen of the main unit, there's no such joy on your phone or tablet screen. It's small details like these that can really add to the user experience – and they shouldn't be underestimated.

Elsewhere, you get the feeling Pioneer has tried to think of every possible use for this unit and what users are going to be plugging in.

The front USB socket is compatible with FLAC and WAV files (up to 24bit/96kHz) and is iDevice friendly, while to the rear the inputs include Ethernet, an asynchromous Type B USB connection for computers, optical and electrical digital and a socket to which the AS-BT200 adapter can be added to give Bluetooth audio capability.

When connected to a computer using the Type B USB or streaming over a network, the N-50 can support LPCM files of up to 32-bit/192kHz.

The only blip on its scorecard is the lack of wireless functionality out of the box.

The AS-WL300 wireless add-on (£70) is the way round this – there's a dedicated USB socket on the back of the unit to power it, and the network connection is again via the Ethernet port.

Pioneer N-50: AirPlay at the push of a button

As well as the iOS capability on the front panel USB, through which you can charge devices as well as streaming music, there's also Apple AirPlay: with the press of a button, you can be streaming music from your music collection or services such as Spotify.

You sacrifice refinement and solidity when compared with a wired connection, but that’s a price some will be willing it pay.

Pioneer provides a sound retriever option for low quality, highly compressed files. This can be set to auto, but we found it affected sound quality of normal quality files even when it wasn’t supposed to.

Tracks sound cloudy and less clear so we’d recommend setting this to off all the time.

Using the player's Pure Audio mode results in a slightly cleaner, tighter sound, but there’s a subtle loss of clarity and openness, which detracts ever so slightly from the music.

However, there’s a lot to like about the Pioneer sound. Emeli Sandé’s Heaven in 16bit/44.1kHz CD quality sounds suitably punchy, dynamc and entertaining. There’s a controlled sparkle to the highs and a natural warmth and solidity to bass notes.

The soundstage displays a fine sense of focus and detail, allowing the listener to wallow in all the detail the N-50 can serve up. Dynamic subtleties within the track are also communicated well.

The Pioneer’s also a very capable machine when you switch to using its internal DAC from an external source.

Feed a signal into either the asynchronous USB input or the optical or coaxial digital inputs and the N-50 still produces the goods with a full-bodied, entertaining sound, in keeping with its abilities when streaming.

Pioneer has obviously gone to great lengths to make the N-50 a rewarding machine to own – not just in terms of design, features and functionality, but also performance. Its undoubted abilities will certainly give some rival manufacturers plenty of food for thought.