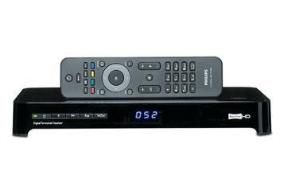 If the price takes your fancy, this is a solid enough proposition

Sometimes you need a little help from your friends and this is exactly what has happened with the Philips DTR-5520.

Philips has enlisted the help of Pace to help it devise a Freeview HD set-top box that can stand out from the crowd. Just to make the point the Philips logo on the top of the unit shares space with a small ‘designed by Pace' logo.

Of course, Pace is a set-top-box specialist, having produced units for various partners including BSkyB, so we've got high hopes for the DTR-5520.

Compared with some of the more sombre-looking units available, the Philips box is neatly turned out, with a streamlined, glossy black, plastic chassis.

A simple display, neat menus
Both the onscreen menus and neat remote control are elegant enough (the wand's layout looks very similar to that of those supplied with other Philips kit).

But, as is the case with the majority of boxes, you don't get an awful lot else for your money. The display is a straightforward numerical affair.

Together with HDMI, composite video and coaxial digital connections, the DTR-5520 also finds itself equipped with an ethernet socket.

But, at the time of writing, there's no mention of access to features such as BBC's iPlayer or Sky Player, although this shouldn't be too difficult to implement in the future.

Similarly, the box's USB input has no function at the moment apart from software upgrades, but support for various music, video and photo file formats will hopefully be included further down the line.

Scaling options and a detailed picture
Still, you do at least get the choice of setting video upscaling to levels of quality as high as 1080p – or, if you prefer, to ‘original,' where each type of video signal is left untouched, ready to be manipulated by an off-board scaler.

So, to quality. Detail with both standard- and high-definition broadcasts is fine, background noise low and, some minor jerkiness to fast motion aside, the picture appears natural, with a convincing colour balance.

Sound quality is meaty and substantial. Listen to tunes through one of the more music-oriented digital radio stations, such as ‘Q,' and the Philips shows decent rhythm, although its dynamics can be bettered.

As for Dolby Digital 5.1 surround sound, you won't get it. Why? because, like quite a few new Freeview HD products, the DTR-5520 can't transcode the HE-AAC audio codec being used by the BBC for its multichannel audio HD broadcasts on the Freeview platform.

A software fix is in the pipeline, but probably won't be ready until September, as you can read here.

The DTR-5520 is fine in its own right but, when you start comparing performance and features, we think that other, more capable boxes are worth the extra cash.

See all our Freeview receiver reviews