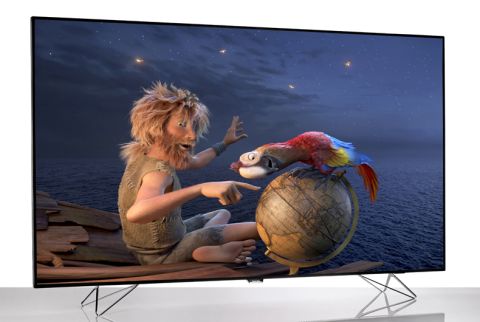 A pricey set with a vivid – albeit uncompetitive – picture, but the Ambilux feature is a highlight

The Philips 65PUS8901 has a 65in screen with 4K resolution, it comes with popular streaming apps ready to go, and will be compatible with HDR (high dynamic range), albeit after a software update later this year. It’s a premium screen too, ranking high in Philips’s line of 2016 TVs, and sells for a cool £4000.

Essentially, this Philips TV ticks every box for a modern TV. And yet, the highlight is the immersive, picture-extending, mad-science concept of Ambilux.

MORE: Philips 2016 TVs: everything you need to know

Ambilux is an evolution of Ambilight, a feature of Philips TVs for over a decade. Ambilight uses LEDs that mimic the colours on the screen, emanating a soft glow of light around the TV. The idea is to create a more immersive experience by extending the picture on screen.

Ambilux turns that concept up past 11. Instead of LED lights, the 8901 uses nine tiny projectors that display the actual image of the screen onto the wall behind the TV. It’s more dynamic, there’s more motion and detail, and you can pick out actual characters and objects. It sounds and looks bonkers, but it’s ridiculously good fun.

What makes it more than a flashy gimmick is that Philips recognises that the effect might be distracting to some, so every aspect of Ambilux is customisable. You can adjust the intensity, the size of the halo, the colours, and even tone it down to a gentle mood light.

You get plenty of different modes, too – ‘Extreme’ and ‘Tunnel’ are best for intense gaming, while the gentler Dome effect is more suited to watching TV. But it doesn’t just respond to pictures. Ambilux works with music as well, with various patterns pulsing according to the beat. Our favourite is the fun-packed Retro mode.

At first, Ambilux is distracting, so you might want to turn it down to its gentlest setting and then work your way up. But just like the more sedate Ambilight, once you turn it off you’ll wonder why the TV’s picture has suddenly shrunk.

You’ll also start to wonder why every TV doesn’t come with Ambilux. It’s not a necessary feature by any means, but we can see many considering this pricey Philips set for Ambilux alone.

Philips’s smart portal continues to be powered by Android TV, whose simple homepage design is easy to navigate, even if it isn’t the most interesting or dynamic of interfaces.

An upgrade to Android 6.0 is due later in the year, which promises a cosmetic touch up and swifter actions. Until then, the neat arrangement of apps, video on demand services, recommended content, inputs and TV settings is easy to get acquainted with from the very start.

Streaming fans will be happy to hear that Netflix and BBC iPlayer are ready to go straight out of the box. But you’ll have to wait for a software update to get Amazon’s video app (which should coincide with the HDR update) and even longer for the remaining UK catch-up TV services.

However, there is a way around it. Download ITV Player or All 4 (or any other compatible app) onto your smartphone and simply ping it over to the Philips TV using GoogleCast.

Scrolling through the smart interface and Philips’s labyrinthine picture settings isn’t entirely smooth, with some lagging issues cropping up. It’s responsive for the most part, even if it does sometimes get confused when we click too fast on the remote control.

If you’re familiar with Philips’s TV remotes, you’ll appreciate that they include a QWERTY keyboard at the back, which makes typing in wi-fi passwords and YouTube search terms so much easier. The remote you get with the 8901 has a D-pad that’s also a touchpad, although we do find this sometimes gets in the way when you’re pressing the buttons as normal.

On an unexpected plus side, you could probably defend yourself against a burglar with the new remote: it’s a big, hefty slab.

So how does the Philips TV actually perform? Much like the Ambilux feature, the 65PUS8901’s picture is a vibrant burst of colour. The primary colours of The LEGO Movie (on Blu-ray) pop out, and the bold yellows, vivid oranges and deep blues are exciting to see. This Philips is an impressive screen.

Each brick is etched out sharply, and there’s a good amount of detail to keep your attention hooked to the screen. This eye-catching quality is even more evident when watching a 4K stream on YouTube or Mad Max: Fury Road in 4K Blu-ray.

The picture is searingly bright (sometimes a little too glaring), but the 8901 uses that resolution to show off the dust and grit in those insane car chases with admirable clarity.

Where the 8901 starts to lose its stars is with motion and black detail. Whether it’s a slow pan or a fast-paced action sequence, you can see faint judders and hiccups around the outlines of objects. You can activate the motion settings to smooth things over, but we found it looks too processed, too artificial – and still doesn’t fully stabilise the motion handling.

Dark scenes on the Philips don’t have the same intensity compared to rivals like the Panasonic TX-65DX902B or Sony KD-75XD9405. Blacks simply don’t go as deep on the 8901, which has a knock-on effect across the picture.

Colour gradients aren’t very subtle, while you won’t see much detail in shadows. That robs scenes of their layered quality. The space between a character and the background isn’t clearly defined – it all looks rather flat and undramatic.

Skin tones don’t have too much variation, either, with the characters in Fargo all having a pinkish complexion that has nothing to do with the Minnesota cold. The pitch black space scenes in Gravity also expose uneven patches of backlighting scattered across the screen.

On the positive side, the 8901’s upscaling is more than decent. It was only a couple of years ago that Freeview or satellite channels looked dismal on a 4K resolution screen, but those days are long gone. Daytime telly on standard definition is perfectly watchable.

The Philips TV doesn’t sound half bad, either. Dialogue is clearly heard, and there are no tinny or harsh edges to make things unpleasant. It’s fine for watching Countdown, but if you want a more expansive sound to go with movie soundtracks, we’d suggest a soundbar or base such as the Dali Kubik One or the Geneva Model Cinema.

From the plain black bezel to the skeletal feet, everything about the 8901 is designed to be minimal. Philips says this is to ensure that nothing distracts you from the 65in picture and the Ambilux experience.

The TV is slim and well built. But there are some practical caveats. It’s a large TV, with stand feet that are far apart – you’ll need a fairly wide support for your TV to stand on.

And if you’re really invested in Ambilux, be prepared to rearrange your living room furniture. For the full experience, you’ll need a large, blank space of wall behind the TV, preferably flat, although we did like the way the projection looked on our test room’s exposed brick walls.

Positioning is crucial: the TV has to be exactly 24 cm away from the wall for the tiny projectors to give their best show (Philips supplies special brackets for wall mounting). Any closer and you’ll find certain areas too bright and too intense; any further, and the projected image loses focus and detail.

That seems like a lot of fuss, but it’s worth it if you’re committed to Ambilux. And that’s the crux of the Philips 65PUS8901: you’ll be buying it for Ambilux, not for its picture quality.

It’s a decent screen, but its motion, backlighting and subtlety issues mark it down, especially when rival screens offer a far more detailed and accurate picture.

And the final nail in the coffin? It costs £4000. Sure, you’re paying for that Ambilux technology, but that premium price is a lot to pay for a middling 4K picture, especially as the stunning, top-notch 4K HDR Panasonic TX-65DX902B costs around £800 less.

We’ve yet to see how the Philips performs with HDR content, but in the end, it’s a clear choice. The 65PUS8901 doesn’t have the picture quality strengths to compete with the best, and it’s entirely too pricey.

But it has something unique: Ambilux is an effective, immersive and fun feature that might just, for some, tip the scales in the TV’s favour.

See all our 4K television reviews