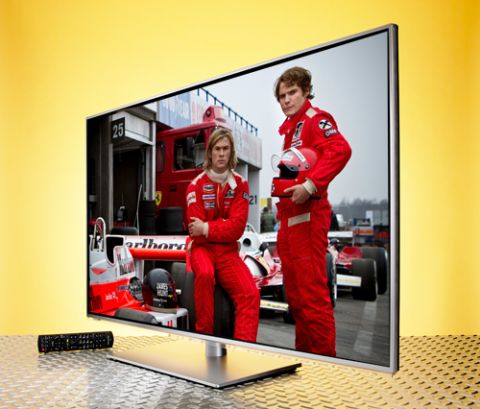 It won’t do 3D, but if it’s an excellent 2D set you’re looking for, this Panasonic is certainly one to consider

Panasonic’s TVs are having one heck of a year, winning Group Tests and five-star reviews in almost every 2013 screen size we’ve tested so far. Not to mention Awards.

So you can imagine our surprise when the TX-L50E6B didn’t impress us in quite the same way.

It’s unusual that Panasonic has decided to omit 3D from the L50E6B’s feature list. It seems a strange omission at this price, and leaves it a step behind its competitors in terms of features.

Of course, 3D isn’t for everyone, and there are plenty that won’t miss it as long as the 2D picture is up to scratch. Luckily, Panasonic has done a great job here, with a Blu-ray of the colourful Toy Story 3 appearing bright and detailed.

Edges are well defined and colours look natural, accurate and deep. Blacks are commendable too, particularly for an LCD set: they reach right down to inky depths for dark scenes, yet still keep a strong hold on shadow detail.

Contrast is good, and those dark blacks don’t suffer alongside much brighter elements. We did notice a little backlight inconsistency in our review sample (evident when the screen was blank), but that didn’t affect our viewing whatsoever – even in the darkest of scenes.

Motion doesn’t fluster the Panasonic either. The L50E6B copes just as well with slow-panning landscape shots as it does with fast action, and we noticed next to no judder or instability during testing. It was a smooth and enjoyable watch throughout.

The Panasonic’s Achilles’ heel is its sound. We’ve come to expect very little from the audio in skinny sets, but this year has brought with it some pretty big strides in that area. The L50E6B’s thin and unconvincing sound is a step backwards from that. If you want decent audio, a soundbar at the very least should feature on your shopping list.

The TX-L50E6B is one of Panasonic’s cheaper sets this year, but you certainly wouldn’t know that from looking at it. It looks very similar to the rest of the 2013 LCD range, with its slim silver bezel and flat rectangular stand.

It’s a mostly plastic construction (no surprise given the slightly lower price) and the stand doesn’t swivel, so it’s a little tricky to position. It’s pretty much a no go if you want to hang it on the wall as well, as all three of the HDMI ports are face backwards, rather than to the side.

Better thought out is Panasonic’s smart TV offering, which is one of the best we’ve seen from a manufacturer this year. The innovative My Home Screen layout is easy to use, and its customisation options are a nice touch, but you get just Netflix and BBC iPlayer for movies and TV catch-up.

It could do with a few more big-name apps to rival Samsung’s class-leading Smart Hub.

Set-up is a breeze thanks to Panasonic’s simple menus. They’re responsive, too: there’s never any waiting around wondering if you’d clicked something or not.

Broadcast TV is catered for via the Freeview HD tuner, but there's no Freesat tuner included as on some other Panasonic sets.

Other connections include a Scart connector, an optical digital output, component and composite video inputs, a headphone jack and two USB ports, not to mention an ethernet port for wired internet connections.

Wi-fi is built-in too, so your TV doesn’t need to be near your router to access online services. You’ll also be able to take advantage of easy content sharing between compatible devices on the same network.

The free Viera Remote 2 app, available for iOS and Android devices, is one of the better companion apps out there and well worth a download. Alongside the usual remote control features it also includes handy extras like the ability to use your phone’s keyboard instead of the on-screen TV one for quicker text input and internet browsing.

Most interesting, though, is the Swipe and Share feature, which lets you share content between your phone and TV. It works well, taking just a few seconds from ‘throwing’ a video from our iPhone to watching it play on the TV.

It’s a great, simple way to show off your mobile and tablet pictures and videos on a bigger screen, too.

It’s a mixed bag, then, the Panasonic RX-L50E6B. While its 2D picture is fantastic and among the best we’ve seen at this level, the lack of 3D at this price feels disappointing.

If you don’t care for 3D then there’s plenty to like, but there are TVs out there that give you more for less, and we’ve docked it a star for that very reason.