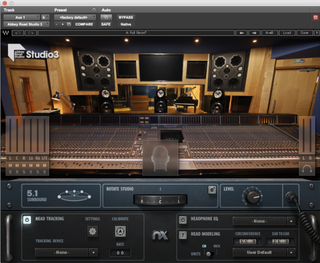 Fancy mixing and producing music in the same studio as the Beatles did back in 1969? Now, you don't need to be signed to a particular record label (or have several rolls of cash kicking around) to make that dream a reality. Well, almost.

If you're fed up with mixing music in your bedroom/office/shed (delete as appropriate), the company behind the world's largest selection of audio plugins, Waves Audio, may have the answer to your artistic prayers. Waves has introduced the Abbey Road Studio 3 plugin, created in collaboration with Abbey Road Studios and powered by Waves' Nx immersive 3D audio technology.

The theory is the plugin allows you to produce and mix as if you were inside Abbey Road's Studio 3, and therefore hear your music the way some of the world’s greatest musicians and producers heard theirs. After all, that very studio is where modern classics by Radiohead, Amy Winehouse and Kanye West, as well as contemporary mixes of the Beatles and Pink Floyd, were all recorded and mixed.

The Waves Abbey Road Studio 3 plugin claims to bring the acoustics of Studio 3 into your headphones in three-dimensional sound. It delivers full 5.1 and 7.1 surround sound, modelled after the studio’s original surround setup. You can mix professionally for surround, and on any set of stereo headphones.

Both Waves Audio and Abbey Road promise that, used with any set of headphones, the plugin gives you the same audio qualities that you'd find in Studio 3. And it shouldn't matter how bad your current mixing and music production environment is as the sound is all in your cans.

Mirek Stiles, head of audio products at Abbey Road says: “Abbey Road has historically been very protective of the acoustic properties of its studios for software emulations, and the Studio 3 control room is no exception. This plugin was probably our most challenging project yet, and we had to make sure it was correct.”

To use the plugin, you'll need a professional music software platform (ie. Pro Tools), plus an Nx Head Tracker – so that when you turn your head, the sound and balance adjusts from ear to ear.

We've heard the plugin, and we stood in Abbey Road Studio 3 with B&W's 800 Series Diamond D3 speakers firing all around us. We have to say, the two experiences sounded very similar...

Behind the scenes at Abbey Road Studios