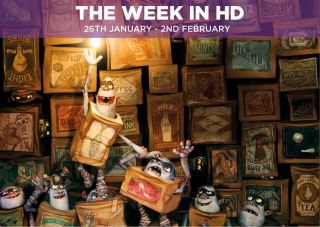 From Laika - the studio that gave us Coraline and Para-Norman - is another charming, stunningly crafted stop-motion animation.

The film deals with a young orphaned boy named Eggs who's been raised by the Boxtrolls - a harmless society of cave-dwelling trash-collectors and inventors. But the humans who live above ground view them as pests and kidnappers, none more so than evil exterminator Archibald Snatcher, who is hell-bent on destroying each and every Boxtroll. And he also wants full membership into the city's cheese-loving council, despite being allergic to cheese.

It's up to Eggs to save his family from being captured, and only a budding friendship with a young girl will help the Boxtrolls and humans live in harmony.

Buy The Boxtrolls on Blu-ray at Amazon

Entwining Alien with Inception, the Christmas special is a dreamy-weamy conundrum that plonks Doctor and Clara in the middle of the Arctic, as creatures known as the dream crabs are slowly invading their minds. But are they in a dream? Or in a dream within a dream?

Only Santa Claus (a brilliantly jovial turn by Nick Frost) can help save the day. It is Christmas after all, who else are you going to call?

But Doctor Who: Last Christmas on Blu-ray at Amazon

Series two hasn't really gripped us in the way the first series' murder mystery did, but it's still worth watching if you've invested in the characters.

Ellie (Olivia Colman) has to deal with family issues, while Alex (David Tennant) faces off past events that have been haunting him.

It's the second leg of the semi-final and time to find out which of these two will be off to Wembley for the Capital One Cup final. Despite arguably dominating the play in the first leg at Anfield, Liverpool couldn't gain the upper hand and come to Stamford Bridge all square and with all to play for.

The rally season begins in Monte Carlo, Monaco, but it's less glitz and more snow, ice and dry asphalt. It'll be strategic tyre choices that wins this race.

Can't decide between Paul Thomas Anderson's latest film Inherent Vice or the posh spy caper Kingsman: The Secret Service from Kick-Ass and X-Men: First Class director Matthew Vaughn? Claudia Winkleman and Danny Leigh give you the lowdown on each film.

There are two divisions between these two sides, but the first leg at White Hart Lane needed an Andros Townsend penalty to give the Premier League side the upper hand. Can the Blades use the home leg to their advantage, or will Spurs stand firm against their League One opposition?

As Cardinal Wolsey finds himself in trouble and Anne Boleyn grows restless, Thomas Cromwell (played by Mark Rylance) has his chance to shine.

A bride-to-be is killed during her hen night, and we're starting to have serious concerns for St Marie's tourism.

DI Goodman must solve this devious murder, but he's also distracted by Camille's big announcement - will she leave him and the police force to go back to Paris?

From sunny Bahamas to snowy, icy Arctic. Continuing the trend for Nordic thrillers, new drama Fortitude takes place in a small town at the northernmost tip of Norway. It looks very very cold.

The savage, isolated landscape is the perfect setting for a 'whodunnit' case, especially as it's the town's first ever murder. The local sheriff is miffed when a London detective (Stanley Tucci) comes to investigate. He soon finds that everyone wants to cover up the crime, including the town's mayor.

Two in the Knees. Lawyers in sharp suits. Client Logan Sanders hires private investigators to dig up dirt on Mike's past, while Louis puts himself in between Jessica and Jeff - but he may have gotten his signals mixed.

2015 didn't exactly get to a heartwarming start, did it? Mr Brooker is here to inform you of all the ridiculousness happenings in the world on a weekly basis, while you sit comfortably in your sofa with a nice hot cup of tea.

Emilie. When a young woman - the titular Emilie of Duras - claims to be having visions from God telling her and her followers to go to war against Spain, Musketeer Aramis is sent to discredit her before the rest of France takes up arms and follows suit.

Rochefort, meanwhile, has his own blackmail-and-murder plans.

A Whole World Out There. There are two Lost alumni in this week's episode. William Mapother (creepy Ethan Rom) is the creepy psycho-killer from another dimension that's sucked some unsuspecting university students into his realm, and Jeremy Davies (who played Daniel Faraday on the island) plays Richie Simpson - Constantine's reluctant friend who needs his occult expertise.

There's a surreal, Saw-horror vibe to this week's episode, which is both unsettling and a nice respite from the usual supernatural shenanigans.

One of these teams is going to win the Premier League title - you don't need to be a psychic to predict that. But picking them apart is slightly more difficult and, while nothing will be decided at Stamford Bridge on Saturday, we might just have a better idea of who has the momentum going into the latter third of the season.

Who's Your Daddy. "My father will hear of this!" is a line that Tom Felton's character does not say, as - firstly - he is not Draco Malfoy here and - secondly - his father is dead.

The investigators keep on searching for clues to Cindy's death, while a past witness comes to Hildy for help.

You know when Top Gear takes three unsuitable cars to traverse across picturesque yet difficult terrain in an exotic country? This is that episode. And it looks glorious.

Clarkson, Hammond and May take three luxury cars - BMW M6 Gran Coupe, Bentley Continental GT V8 and Nissan GT-R - on a stunning road trip across Australian's Northern Territory. They must get past crocodile-infested rivers, a giant open mine that doubles up as a very dangerous race track, and uninhibited landscapes... in order to herd 4,000 cows.

Kiefer 'Jack Bauer' Sutherland is the Star in the Reasonably Priced Car.

It's the biggest sporting event in America as Super Bowl XLIX arrives in Arizona. Now, we won't pretend to have much knowledge of the sport (rugby's better), but we do know that defense will be the name of the game as both the Patriots and Seahawks have tough backlines.

Whoever wins, the ramifications will be felt elsewhere. Seahawks fan Chris Pratt (better known as Star-Lord from Guardians of the Galaxy) and Patriots fan Chris Evans (Captain America himself) have challenged each other to visit a children's hospital in the victor's city wearing their Marvel superhero costumes. Whatever the outcome, we can't wait to see how this pans out.