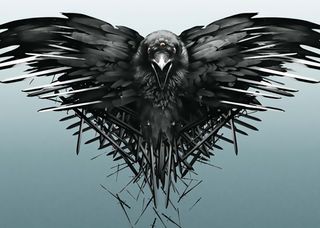 Also, check out our (great) new Twitter account @WHFplaylist for the latest news and reviews of our favourite movies, music, TV shows and games, as well as competitions that you can enter to win some shiny prizes.

The Hobbit: The Desolation of Smaug – Blu ray

It's saying something when a new episode of a TV show trumps the release of a fantasy film by Peter Jackson, but for the moment, Middle Earth is living in the shadow of Westeros.

That's not to say that this trip back to Tolkien's world isn't worth a look. If you felt that An Unexpected Journey was a bit stuffy and slow, then Desolation remedies that with a story that barrels along (quite literally) to an encounter with mo-cap assisted villain Smaug, voiced by Benedict Cumberbatch.

The American remake of the great South Korean film of the same name. As with all remakes, we do dread seeing the eventual film and judging by what we've seen of this, it doesn't match up to the original.

It's a shame considering the talent of all involved, but we were hoping for just a bit more. We have no idea what accent Sharlto Copley is trying to do, though.

Two Swords. It's back. How we've missed the shenanigans and downright misery that Game of Thrones likes to inflict upon its audience.

Two Swords picks up after that wedding, with The War of the Five Kings in remission and the land of Westeros looking to pick up the pieces.

If only it was that simple.

Chelsea go into the second leg of their Champions League tie two goals down and staring elimination directly in her uncaring face.

But the last time they were in this position (against Napoli two years ago), they stormed back and won the competition.

They're up against better opposition and a fit Zlatan Ibrahimovic will be looking to send Chelsea out. Mourinho will be thinking "no, not today."

Sentenced to 30 years in prison, this documentary film sifts through the aftermath of a shocking story.

Everyone expected a beating of Red Wedding-style proportions when Bayern strolled into the town. However, United battled to a creditable draw and, despite conceding an away goal, are still in the tie.

Could they go one further…?

Episode seven. The competition hots up as six more amateur cooks prepare special dishes in the hope of impressing the judges.

As always, carry a napkin, just in case you start drooling over the food.

Believe tells the story of a gifted young girl called Bo and a man sprung from prison who has to protect her from those who wish to exploit her gifts.

Origin delves into the past of Bo's mother which reveals a few details of how this situation came to be.

Dressed to Kill. This week finds Castle in the midst of a scandal within the fashion world as he probes the death of a magazine assistant. As well as that, this episode reveals a little bit of Beckett's (Stana Katic) past as we find out she used to be a model.

Is there anything she hasn't done?

Episode eight. Last episode of the heavily promoted Sky drama. For those who've not been following, The Smoke follows a group of firefighters who have to deal with, ahem, pressure cooker situations on a weekly basis.

The previous episode saw an explosion in the Blackwall Tunnel. This episode deals with the aftermath as the group try to cope with the repercussions of the explosion.

Day two of the US Masters. Tiger Woods is out through injury but there are others to keep an eye out with Mcllroy, Mickleson, Singh and Westwood all looking to don that green jacket.

Yes Men. Yes Men sees a Thor related crossover with Lady Sif joining the group as she hunts down an Asgardian (Lorelei) who escaped from Asgard during the events of Thor: The Dark World.

It feels like a notable step up in production quality as we enter the final run of episodes that'll take Agents to finish line.

A classic? You bet. One of the most talked about comedies of the late nineties, its style may have been surpassed by the raunchier efforts of Apatow & co, but it's still a great, squirm-inducing comedy of mishaps that feels so rare these days.

While Arsene Wenger's team go into this match as favourites, recent form has seen them drop from title challengers to also-rans.

Wigan have been on a very good run, defeating the Manuel Pelligrini's Man City in the last round. Arsenal will not want to take anything for granted.

If Bayern Munich weren't the juggernaut they've been this season, this match may have had a semblance of importance.

Instead, Dortmund have been ravaged by injuries and Bayern have strolled to the title in record time.

It may not be of any consequence, but when these two teams go at it, sparks are bound to fly.

Live coverage of the US Masters as the tournament moves into its third day.

Try and find a comfortable place on the settee, as the BBC's coverage will going on for four-and-a-half hours.

The Deal. Has there ever been a bad episode of The Americans? We don't believe there has and while this show doesn't receive the plaudits of, say, a Breaking Bad, it's every bit as compulsive to watch.

The Deal sees relationships falling apart at the seams as agents on both sides of the US-Russia divide find it difficult to keep up appearances.

Cracking war film from Sir Ridley Scott and arguably his last 'great' film. A really good film for trying to spot the actors and what's happened to them since.

Josh Harnett seems to have disappeared whereas Tom Hardy has risen to prominence. And for eagle-eyed Game of Thrones fans, have a look for Nikolaj Coster Waldau (the Kingslayer himself with an excellent American accent) in an early role as a US solider.

The second of the two the FA Cup semi-finals sees Premier League Hull City up against less fancied Sheffield United.

Both teams may never get a better chance to reach a FA Cup final in their supporters lifetimes so both will be chomping at the bit to reach the final at Wembley.