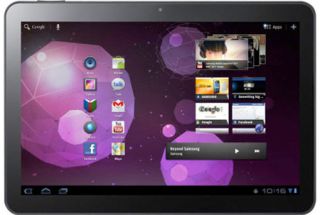 Samsung remains unable to sell its Galaxy 10.1 tablet in Germany after a court upheld a previous patent ruling brought by Apple.

The court ruled that parts of the design "too closely" resembled the Apple iPad 2. Samsung is banned from selling the 10.1 directly in Germany but distributors who acquire stop from elsewhere can still sell the tablet.

While an initial ruling in the long-running feud applied the ban across the whole of Europe, it now only applies in Germany.

Samsung predictably said in a statement that it will appeal the ruling, which it said "severely limits consumer choice in Germany."

Published 26.08.11: A court has banned Samsung from selling its Galaxy Tab computers in Germany, following an injunction request from Apple – just days after Apple got an interim injunction preventing the Korean company's Dutch subsidiary from selling three Galaxy smartphone models in Europe.

The ban comes just a few days before the opening of the giant IFA consumer electronics show in Berlin, and runs until at least September 9th, two days after IFA closes.

The German court handed down the temporary ban after hearing arguments from both Samsung and Apple, the latter having argued that the Tab models 'slavishly' copied its iPod design.

Samsung had pressed for a decision before IFA, but the response was that there were what the judge described as 'overarching similarities' between the Tabs and iPad, and that a ruling would be given on September 9th.

The ruling only applies to German sales, and it's not clear whether this precludes Samsung from promoting the Galaxy Tab products at IFA, held annually in Germany but viewed by many as Europe's major consumer electronics event.

Samsung's just been hit with another Euro-ban at the behest of Apple.

But while the preliminary injunction, put in place by a court in the Netherlands, affects three of its models and applies to sales in ten countries, Samsung seems unconcerned by the latest move.

It comes on the back of repeated Apple requests for injunctions citing alleged patent infringements, but this time concerns only one patent, EP2059868, regarding the way pictures are displayed and manipulated on the screen.

The ban will come into effect in seven weeks.

However, Samsung is viewing this latest move as a positive: like many other companies, it imports products for Europe through Dutch ports, and of course this ruling only affects its Dutch companies.

So, with a re-jig of its supply chain, it should be possible for it to continue sales of product in Europe via direct imports into the countries mentioned in the ruling, or imports through another 'hub' country.

And it's pledging to do everything it can to ensure continuity of supply to Dutch customers, too: it says 'Today's ruling is an affirmation that the Galaxy range of products is innovative and distinctive.

'With regard to the single infringement cited in the ruling, we will take all possible measures including legal action to ensure that there is no disruption in the availability of our Galaxy smartphones to Dutch consumers

'This ruling is not expected to affect sales in other European markets.'

And now the ongoing legal battle between Apple and Samsung seems to have come down to a single aspect of the design – the handling of pictures - it looks likely that, with a resolution to this problem, the conflict could be brought to a halt.

In other words, Samsung may appear to have lost this round in court, but it seems to be viewing the ruling as a victory.