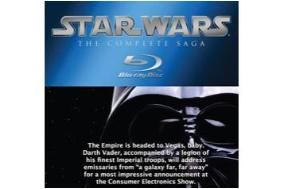 A couple more snippets for Star Wars fans eagerly awaiting the Blu-ray release: you can see a deleted scenes snippet on YouTube, or download it here.

And there's now an official Star Wars UK Facebook page for those who want all the latest info.

If you pre-order Star Wars: The Complete Saga on Blu-ray you'll receive your own limited edition Star Wars film cell.

The film frame is mounted and features original artwork from the Star Wars Blu-ray collection. Each one is numbered for authenticity.

If you're after a Star Wars fix to tide you over until the Blu-ray release of Star Wars: The Complete Saga on September 12th, how about a teaser video?

It's the smallest of snippets and certainly not in HD quality but for the hardened fan it is nevertheless a clip from the forthcoming release.

Head over to the Play.com Facebook page in order to view the video.

Read the full details on the massive Star Wars: The Complete Saga Blu-ray box set below.

There had been some intitial confusion following the generic 'surround sound' tag given in the earlier release information (see below).

Just a quick update on the forthcoming Star Wars: The Complete Saga due out on Blu-ray in the UK on September 12th.

The disc will have DTS 6.1 surround sound, plus 40 hours of special features, including never-before-seen content sourced from the Lucasfilm archives.

DISC ONE – STAR WARS: EPISODE I THE PHANTOM MENACE

o Including: deleted, extended and alternate scenes; prop, maquette and costume turnarounds; matte paintings and concept art; supplementary interviews with cast and crew; a flythrough of the Lucasfilm Archives and more

o NEW Star Warriors (2007, Colour, Apx. 84 Minutes) – Some Star Wars fans want to collect action figures...these fans want to be action figures! A tribute to the 501st Legion, a global organization of Star Wars costume enthusiasts, this insightful documentary shows how the super-fan club promotes interest in the films through charity and volunteer work at fundraisers and high-profile special events around the world.

o NEW A Conversation with the Masters: The Empire Strikes Back 30 Years Later (2010, Colour, Apx. 25 Minutes) – George Lucas, Irvin Kershner, Lawrence Kasdan and John Williams look back on the making of The Empire Strikes Back in this in-depth retrospective from Lucasfilm created to help commemorate the 30th anniversary of the movie. The masters discuss and reminisce about one of the most beloved films of all time.

o NEW Star Wars Spoofs (2011, Colour, Apx. 91 Minutes) – Enjoy a collection of Star Wars spoofs and parodies that have been created over the years, including outrageous clips from Family Guy, The Simpsons, How I Met Your Mother and more — and don’t miss “Weird Al” Yankovic’s one-of-a-kind music video tribute to The Phantom Menace.

o The Making of Star Wars (1977, Colour, Apx. 49 Minutes) – Learn the incredible behind-the-scenes story of how the original Star Wars movie was brought to the big screen in this fascinating documentary hosted by C-3PO and R2-D2. Includes interviews with George Lucas and appearances by Mark Hamill, Harrison Ford and Carrie Fisher.

o The Empire Strikes Back: SPFX (1980, Colour, Apx. 48 Minutes) – Learn the secrets of making movies in a galaxy far, far away. Hosted by Mark Hamill, this revealing documentary offers behind-the-scenes glimpses into the amazing special effects that transformed George Lucas’ vision for Star Wars and The Empire Strikes Back into reality.

o Classic Creatures: Return of the Jedi (1983, Colour, Apx. 48 Minutes) – Go behind the scenes — and into the costumes — as production footage from Return of the Jedi is interspersed with vintage monster movie clips in this in-depth exploration of the painstaking techniques utilised by George Lucas to create the classic creatures and characters seen in the film. Hosted and narrated by Carrie Fisher and Billie Dee Williams.

o Anatomy of a Dewback (1997, Colour, Apx. 26 Minutes) – See how some of the special effects in Star Wars became even more special two decades later. George Lucas explains and demonstrates how his team transformed the original dewback creatures from immovable rubber puppets (in the original 1977 release) to seemingly living, breathing creatures for the Star Wars 1997 Special Edition update.

o Star Wars Tech (2007, Colour, Apx. 46 Minutes) – Exploring the technical aspects of Star Wars vehicles, weapons and gadgetry, Star Wars Tech consults leading scientists in the fields of physics, prosthetics, lasers, engineering and astronomy to examine the plausibility of Star Wars technology based on science as we know it today.

After much buzz and a mass appearance of Storm Troopers on the CES 2011 show floor, it's been announced that the entire Star Wars Saga is now available to pre-order on Blu-ray.

In the UK it's Amazon you need to visit to get your order placed, and the great news is that as well as a complete 9-disc set with all six films, the two trilogies are also available separately (though why you'd want the prequel trilogy on its own is beyond us).

The 9-disc set will set you back £70, while the two trilogies are available for £34 each, but while you can order now, you'll be waiting until September for your delivery.

Now this email certainly got our attention. We've just received an invite from Panasonic for tomorrow (Jan 5th) telling us "the Empire is headed to Vegas baby. Darth Vader, accompanied by a legion of his finest imperial troops, will address emissaries from a galaxy far, far away for a most impressive announcement at the Consumer Electronics Show".

We already know, of course, that all six Star Wars films are due to be released on Blu-ray in the autumn of this year. Given Panasonic's involvement in authoring Blu-ray discs such as Avatar, on which it has an exclusive distribution deal, could it also have done a similar deal with LucasFilm?

Rest assured we'll be the first to let you know tomorrow as soon as Panasonic has spilled the beans. In the meantime, keep up-to-date with all the latest tech news coming out of Vegas on our special CES news channel.