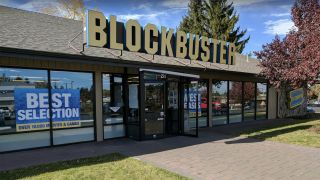 Did you know Blockbuster was still a thing? Perhaps not, but we'd hazard a guess that most people reading will remember the company's glory days.

Blockbuster was the place to go for video rentals in the 1990s, offering VHS and then DVD rentals to film fans overjoyed by the prospect of an almost unlimited selection of movies, from more than 9000 stores around the world.

The company did move with the times, offering mail order and streaming services, but neither as rapidly nor as successfully as competitors such as LoveFilm and Netflix.  And thus, the 2000s proved to be a tough time for Blockbuster, with the company entering into administration and the stores disappearing from high streets. However, somewhat against the odds, the brand has just about stayed alive. But it seems now the very final days are definitely in sight.

There will soon be just one store left in the world, reports Slash Film, with the Perth, Australia store announcing it will close at the end of the month. This will leave the Blockbuster in Bend, Oregon, USA (picture, top), the very last Blockbuster shop in existence.

2013 was the end of the road for Blockbuster in the UK, with various buyouts and rescue attempts failing to save what was left of the business. The remaining stores around the world are franchise operations, sold by satellite TV provider, Dish Network. And now there is just one store clinging on to life.

That said, with the now famous Oregon Blockbuster recently selling its own brand Blockbuster beer, it's perhaps in no mood to let the name die any time soon...