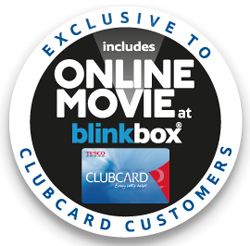 The service is exclusive to Tesco Clubcard customers, who will need to link their Clubcard account to a Blinkbox account to get digital versions of the eligible films.

Buy the film online or in store with your Tesco Clubcard and you can then watch via Blinkbox on PC, Mac, PS3 or LG and Samsung smart TVs. Blinkbox is coming to Xbox 360 and iPad soon, too.

Launching on December 2nd, films eligible from launch include Harry Potter and the Deathly Hallows – Part 2 and Transformers 3: Dark of the Moon, plus a range of TV series releases including Top Gear: At The Movies and John Bishop Sunshine Tour.

The move comes after Tesco bought an 80% stake in movie streaming service Blinkbox back in April this year.

To celebrate the deal, Blinkbox is offering 25% off up to three film rentals until the end of the year if you enter a TESCOCARD25 as your discount code – and you don't need to use a Tesco card.