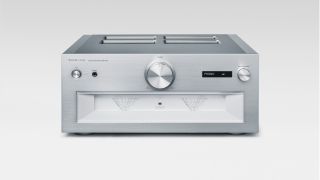 Technics has added an amplifier to its Reference Class series of products, unveiling the much anticipated SU-R1000 on Tuesday morning.

Its development having been teased at a different launch a couple of months ago, the SU-R1000 is a feature-packed digital amp and will be available to buy this November at a cost of around €8000.

It being a digital design might raise a few eyebrows, entering a high-end market where class leaders are usually analogue, but Technics believes digital amps have great potential for further development and promises its offering is capable of matching and surpassing its competitors.

As such, Technics has been hard at work developing new technologies simply unattainable in an all-analogue component.

One such is ADCT (Active Distortion Cancelling Technology), which aims to eliminate distortion generated in the power stage caused by the speaker's electric load, working alongside existing proprietary tech such as LAPC (Load Adaptive Phase Calibration) and JENO (Jitter Elimination, Noise-Shaper Optimization) for as accurate as possible a response.

Analogue remains a major part of Technics's business, though, and it has incorporated an innovative new phono module to make the most of any turntable being used with the SU-R1000.

It consists of three parts: an Accurate EQ Curve where high frequencies are boosted before analogue-to-digital conversion for more accurate processing thereon; and a Crosstalk Canceller and Response Optimiser, both of which utilise a bundled-in calibration vinyl to correct crosstalk and characteristic disturbance.

Technics has certainly succeeded in melding analogue and digital technology in the recent past, doing so brilliantly with the SL-1000R, our current reference turntable.

The SU-R1000 Reference Class digital integrated amp is due to be made available in November, in either silver or black finish.

Technics has given a guide price of €8000, though that may well vary when translated into other currency.