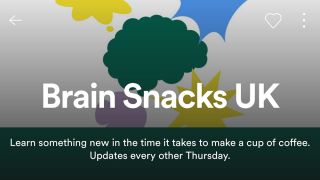 Spotify has rolled out three weekly, human-curated podcast playlists in six countries, as reported by The Verge.

Spotify users in the UK, US, Germany, Sweden, Mexico and Brazil now have access to 'Best Podcasts of the Week', 'Brain Snacks' and 'Crime Scene'. Each are localised to each country, populated by curators in each location that Spotify has hired specially for the job.

The 'Crime Scene' playlist dives into gruesome true crime and will be updated every Tuesday, while 'Brain Snacks', which will be updated every other Thursday, promises to teach you "something new in the time it takes to make a cup of coffee". All three playlists sit at the forefront of the Podcast section in the Spotify app.

According to the report, the playlists have been created for people who already listen to podcasts to “build a habit around listening on Spotify,” says Courtney Holt, vice president and global head of Studios & Video. Holt says Spotify is hoping these playlists will also engage people who have never listened to a podcast before.

Spotify has been ramping up its podcast efforts in the past year. In February 2019 it purchased giant podcast producer Gimlet Media and podcast creation and publishing firm Anchor. Its own Spotify Studios – the team that oversees all relationships, development, and production associated with podcasts – also produces podcasts.

Holt told The Verge that the curators have been instructed to pick what the best content is, regardless of whether Spotify has made it or not. "The goal is to reflect what is interesting to a broad constituency, and if our shows rise to the occasion, that’s great, but the idea is that this is not a way to celebrate Spotify-produced content. It’s a way to celebrate the shows you have to hear in any given week because they’re amazing,” he said.

Tidal vs Spotify – which is better?