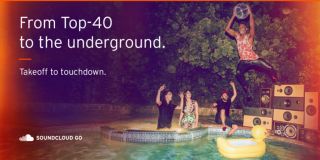 Ever since SoundCloud confirmed a licensing deal with Sony Music earlier this month, we knew we were counting down to the launch of a new addition to the paid streaming landscape. And now it's official.

SoundCloud Go is the name of the new service, and it launches today, 29th March, in the US on Android and iOS. It comes with a 30-day free trial, after which it will cost $9.99 per month - the same as the standard services from Spotify, Tidal and others - or $12.99 per month if you subscribe directly through the iOS app (SoundCloud is seemingly passing on Apple’s 30 per cent charge).

The new SoundCloud Go will be completely ad-free, comes with the ability to save and download your music for offline playback, and promises to include “even more tracks”, with singles and albums available to stream.

Offline playback is a key new feature and allows you to save ‘likes’ and playlists to your mobile phone for listening without a network connection. SoundCloud Go subscribers will be able to set the app to do this automatically for all future likes and playlists, too.

The new service is also a big update for the artists who use SoundCloud Pro Unlimited to promote their music. These users can benefit from a reduced $4.99 per month subscription to SoundCloud Go for the first six months.

There’s no word on the SoundCloud Go audio quality, which we’d expect to want to equal the 320kbps MP3/256kbps AAC standard offered by the $10 per month streams from the likes of Apple Music, Spotify, Tidal and Qobuz. As it stands, audio quality is left to the person doing the uploading, giving no guarantee of a minimum sound quality.

There’s also no news on a UK or Europe release date, with SoundCloud Go available only in the US for now. Either way, the streaming landscape just got more crowded...

MORE: Which is the best streaming music service?