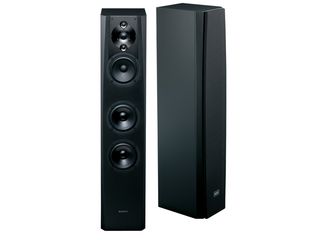 The new speakers come in the form of the SS-AC3 three-way, six-driver floorstander (above) and the SS-AC5 two-way, four-driver bookshelf speaker – both of which aim to bring concert-quality sound into the home.

An "immensely strong" 30mm baffle board joined to the rear enclosure is at the heart of the SS-AC3 in a bid to reduce internal vibrations, while a 13cm woofer with aluminium diaphragm is also found inside.

Mid-range and tweeter units have their own "acoustically isolated" enclosures, separate from the woofer cabinet space with their own reflex port in a two-part design that reduces the effects of air pressure.

Meanwhile, Sony's I-ARRAY System is on board to supplement a 25mm soft-dome main tweeter with two 19mm soft-dome assist tweeters to increase the "sweet spot" at higher frequencies.

With the SS-AC5s (above), you also get a specially shaped baffle board to help reduce vibrations and resonance – as well as a 13cm woofer that's partnered by the I-ARRAy triple high-frequency driver set up.

Two rear-firing bass reflex ports are designed to enhance low frequency power in your living room. Both the AC3s and AC5s are due on sale in "autumn 2014" at a cost of £1000 and £600 respectively.