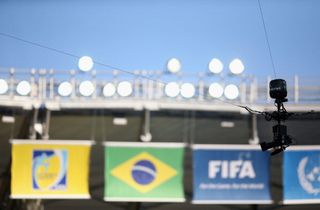 With less than 70 days until the 2014 FIFA World Cup kicks off in Brazil, world football's governing body and Sony have announced that they are to extend their 4K Ultra HD coverage of the tournament.

It was revealed last September that they would be working together to produce and broadcast the World Cup Final in 4K, following successful trials during the Confederations Cup.

FIFA said the move would help "further promote the growth of 4K content", which could prove to be a boost to a fledgling format that currently offers very little in the way of native content for viewers.

FIFA will use Sony technology to film one match in 4K from the round of 16 – due to take place on 28th June – and one quarter-final on 4th July, as well as the final on 13th July.

The Japanese firm will provide "extensive technical support", including the development of a 4K live production system. Equipment such as the CineAlta 4K live camera PMW-F55 will be used.

A selection of games will feature in the Official 4K Film, which will be distributed online by FIFA using 4K content distribution services at the end of the tournament.

Soichi Kawachi, vice president in charge of the FIFA partnership at Sony, said: "We will deliver a unique and totally compelling entertainment experience, conveying the excitement of the matches in Brazil with the depth and vividness that the ultra-high definition of 4K delivers."

FIFA director of TV Niclas Ericson added: "4K will propel fans around the globe into a whole new viewing dimension and it marks the dawning of a new era in the broadcasting of sport."

With data suggesting the 2010 World Cup Final was viewed by 910 million people in homes around the world, the 2014 World Cup could prove to be a milestone moment in the development of 4K.

And it could also prove to UK broadcasters such as BBC and Sky that demand for 4K broadcasts exists here, with trials having already been carried out at events such as Wimbledon.