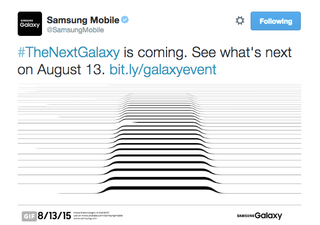 This pretty much confirms rumours doing the rounds that the Korean giant is about to unveil a new Galaxy Note 5 flagship phablet and possibly even a new super-sized version of its curvy S6 Edge.

The Galaxy Note 4 is one of our current favourites when it comes to smartphone video and audio quality, and initial reports suggest the fifth generation of the handset will offer a more premium finish, bringing it into line with the current S6 and S6 Edge.

There are also rumoured to be changes to the phone's internal processor and the S Pen stylus, including a tweak to the way it's housed in the handset.

It's also likely that Samsung will use this event as an opportunity to take the wraps of a larger version of the S6 Edge+. The current model has a 5.1in Super AMOLED screen, but the '+' looks set to get more real estate and a bump up to 5.5inches.

Samsung will be streaming the event live on its website on the 13th, starting at 11am EDT - 4pm in the UK.