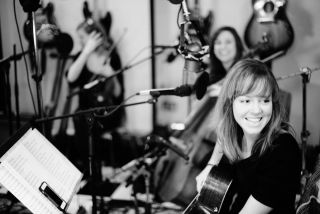 It’s all too clear the High Street is has its work cut out, but if there’s one tiny part of it worth getting behind, it’s independent record shops. Obviously.

That’s why Record Store Day is such a fine idea, a win/win/win/win for stores, for artists, for record companies and for vinyl lovers.

Some of the biggest names in recording technology are involved too – Abbey Road Studios, for example, has been mastering and cutting 7” vinyl discs from the likes of Coldplay, Marianne Faithfull, Kylie and PIL, specifically for release on April 19th.

And here at the nation’s (no, the planet’s) leading guide to all things hi-fi, we’re particularly taken with Songs Beneath The River, a 10” 4-track EP, by Emily Barker & The Red Clay Halo. We wrote about Dear River, the band’s most recent album, in our August 2013 issue (“poised… unified… high on authenticity and low on histrionics…” we said in the middle of a five-star review), so our interested was pre-piqued.

The choice of material – Do Right Woman, Do Right Man (most famously by Aretha Franklin), Patti Smith’s Easter, Springsteen’s Tougher Than The Rest and Tom Waits’ Day After Tomorrow (it’s the law now, we believe, that any collection of cover versions MUST include at least one Tom Waits song) – is impeccable. But that’s not what intrigued us most about Songs Beneath The River.

On Saturday 15th February this year the band played a sold-out show at Kings Place; on the Sunday morning they were in Mark Ronson’s Zelig Studio to record the EP. Mastering directly to vinyl (Zelig, handily, is next door to Gearbox Records’ mastering suite), the songs are performed live with, of course, no opportunity for mixing or editing and, consequently, no room for error.

We spoke to Emily about the process (“each side is recorded in a single take, mixed and mastered as you perform…”) and about the pros and cons of vinyl as a music-storage format.

“I grew up listening to my parent's vinyl collection. I remember when I was a teenager, my dad giving me a lesson in how to use the system and handle the records properly so as not to damage them... I remember feeling nervous the first time it was my turn to take a vinyl record from its inner sleeve, juggle the cardboard cover and inserts, then place it on the player and lower the needle onto the disc.

"I used to love the moment just before the music started, the dusty, warm sound of the record spinning and the suspense of the needle about to meet the first song.

"When I moved out I travelled for quite a few years with a Discman and a wallet full of CDs, all replaced some years later by an iPod. So it's only recently, since having a permanent abode, that I've got myself a record player and started buying and listening to vinyl again.

"But it's not only the tactility of vinyl, the scale of the artwork, the nostalgia. I do also prefer the sound quality over MP3 and CD. That's why I wanted to release my own music on vinyl… for Dear River, Linn Records took the vinyl release to a whole new level. So much care and attention was lavished on that vinyl pressing, and I think the results speak for themselves in terms of quality of the finished product.

"Of course Linn also sell Studio Master downloads, high resolution 24 bit digital files, which are a revelation in terms of digital music files - I was completely blown away when I first heard a demonstration at the Linn Factory in Scotland. But I'll still choose vinyl first whenever the option is there.”

Songs Beneath The River is released on April 19th. It is limited to 500 copies.