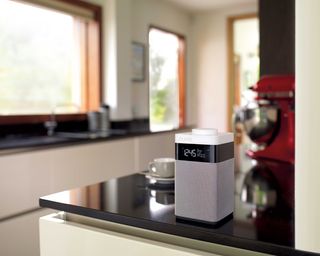 The Pop Mini is the smallest of the trio and is aimed at those who are limited on space. Its small stature also makes it portable, meaning it can be moved anywhere in the house with ease. It features 10 preset stations with five dedicated keys in response to customer feedback on ease of use.

The Pure Pop Midi (pictured) benefits from the same footprint as the Mini, but thanks to its greater height should deliver a bigger sound. The Pop Midi will be released in Bluetooth and non-Bluetooth versions.

MORE: Read all our Pure reviews and news

The Pop Maxi is the largest speaker of the three and is double the size of the Midi. It comes with Bluetooth as standard. Due to its large size, the Maxi is able to deliver stereo sound from either FM, digital radio or Bluetooth streaming.

All three Pure Pop radios sport a large button on the top of the unit which turns the radio on - automatically selecting the station previously listnened to and the volume level listened at - and a large clock display on the front which displays scrolling text.

The Pure Pop range of radios will retail from £60 up to £100. The Pop Midi will be available to buy from September with the rest of the range being available later in the year.