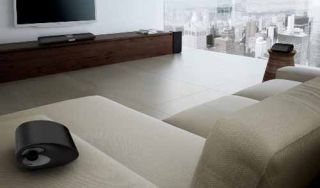 Philips has finally confirmed the release of its innovative new Fidelio soundbar, the HTL9100. It's due out later this month and will cost £699 – and we will be bringing you a review very soon.

First launched at CES at the start of the year, the HTL9100 can operate as a standard soundbar with wireless subwoofer or, thanks to detachable wireless speakers, switch to a surround sound system with wireless rear satellite speakers.

Thanks to on-board 5.1 decoding, the HTL9100 Fidelio soundbar can automatically switch from a virtual surround sound mode when acting as a soundbar to delivering a standard 5.1 signal when rearranged with two rear speakers.

Powered by 2-cell lithium polymer rechargeable batteries, the detachable speakers claim to be good for 10 hours of sound and are recharged as soon as they're reconnected to the main unit.

The sub is also wireless, connecting via Philips' proprietary SMSC 5.8GHz wireless system in an effort to avoid interference from existing wireless or Bluetooth networks.

Talking of which, the Philips HTL9100 also supports Bluetooth streaming from compatible phones, tablets and computers.

You can read more about the new soundbar in our Philips HTL9100 hands-on review from CES.