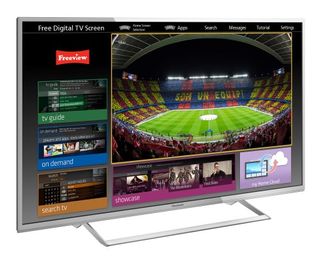 Panasonic has today announced details of its 2014 TV line-up, confirming details of the TVs coming to the UK after first revealing its new sets at CES. As you might expect, it’s extensive, ranging from the entry-level to whistles-and-bells 4K Ultra HD models.

For the first time in Panasonic flat-screen history there’s not a plasma model to be seen, the company having officially ended plasma TV production last year. But Panasonic assures us the merger of its Plasma and LED LCD engineering departments simply means it has ‘unparalleled picture-quality know-how’ within its Viera TV division.

At the top of the shop sits the AX802 (below), the 50in, 58in or 65in 3D 4K Ultra HD flagship of the entire range. With a resolution of 3840 x 2160 pixels, powerful-sounding algorithms like ‘Hexa Processing Engine PRO’, ‘4K Intelligent Frame Creation’ and ‘4K Studio Master Drive’ at work, HDMI 2.0 inputs, 2000Hz backlight scanning and THX 4K Display certification, the AX802 certainly seems equipped to compete.

Panasonic is promising ‘a more intense and real experience than ever before’, and the ability to transmit 4K 60fps signals as well as receive them is a useful feature. The AX802 also supports 4K playback from USB, SD card or online sources (Panasonic is promising a 4K TV channel, offering access to high-resolution content on demand).

Twin HD tuners mean the AX802 can receive two separate HD programmes via cable, satellite or DVB-T and, in parallel, record one of those channels to an external USB hard drive.

It’s possible to start watching a previously recorded show while recording a second programme as well as push it to your tablet or smartphone. The usual options for accessing photos, music or movies held on network-attached storage via DNLA are in place too.

Building on the improvements made last year to its TVs’ online functionality, the AX802 is awash with intelligent features. ‘My Stream’ provides individualised channels of personalised content, aggregated from numerous sources (cable and terrestrial broadcasts, video-on-demand sources, self-recorded content, photos, online videos) and allows easy, rapid access to the sort of content your TV reckons you probably like. Use ‘My Button’ on the touchpad remote control or Remote 2 app to build a personalised profile of your favourite content.

Both the remote and the control app feature voice-print technology. The TV can recognise who in the household is in control and can automatically summon their ‘My Stream’ profile, as well as allowing the user to control and interact with the TV via voice control.

And even when the AX802 isn’t on, it can deliver relevant information (like the time and the weather forecast) to the screen using proximity sensors and face-recognition technology via its built-in camera.

MORE: Panasonic adds Freetime to Freesat and Freeview TVs for 2014

Directly beneath the AX802 in the pecking order sits the AS802 (available in 47in, 55in and 60in sizes, pictured above). Apart from its 1920 x 1080 specification and subsequent lack of 4K Ultra HD compatibility, its specification is identical to that of its AX902 sibling. So those who can’t quite justify the full 4K outlay just yet can still enjoy some top-of-the-range cachet.

Moving down the range, Panasonic hopes the biggest volume of sales will come from its AS740 (four screen sizes from 42in to 60in, pictured below) and AS650 (three sizes, 42in to 55in) series. These are dual-core equipped, 3D LED TVs with dual HD tuners (satellite and DVB-T), streaming to tablet or smartphone via the Remote 2 app and Panasonic Cloud, and the same ‘My Stream’ functionality as their pricier siblings.

Also trickling down from the AX802/AS802 spec-sheets are ‘My Button’ and ‘Voice Assistant’ via the touchpad remote.

Both series share the same 1200Hz backlight scanning, Intelligent Frame-Creation PRO technology in a drive for ultra-accurate motion handling. In fact, as far as we can tell the biggest difference is the camera built into the AS740 for use with Skype calls and what-have-you. The AS650 goes without.

Down at the entry level is where you find AS600, AS500 (above) and AS400 series. These are Full HD (apart from the 32in models, which are HD-ready), LED-backlit LCD devices, available in ‘several’ sizes from 32in to 50in.

All feature 100Hz Backlight Blinking image processing technology. In addition, the AS600 and AS500 have integrated wi-fi and DNLA compatibility, and the AS600 is also packing ‘My Stream’ and ‘Voice Assistant’ functionality.

And in a 'one more thing' style, Panasonic also teased a new 4K TV for later in the year. The Panasonic AX902, a further 4K UHD TV due in the autumn. The AX902 will include ‘several as-yet undisclosed picture quality and ‘beyond smart’ advances’.)

Pricing and availability is yet to be confirmed for any of these TVs, but expect it to be a) competitive and b) pretty soon.