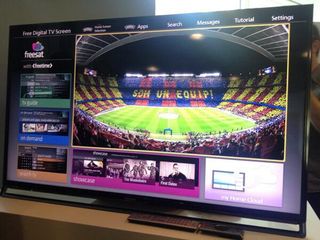 Panasonic has today unveiled a deal that will see Freesat's Freetime service included on selected Panasonic Viera smart TVs (from the midrange AS660 series and upwards), including both Freesat and Freeview models. The first model so equipped is the Ultra HD 4K Panasonic TX-50AX802B pictured above.

Users of the service will be able to view a smart TV guide that lets you scroll back and watch shows from the past seven days, and gain access to on-demand services including the full range of UK catch-up TV services: BBC iPlayer, ITV Player, 4oD and Demand 5. Also included are BBC News and BBC Sports apps.

Viewers will also receive daily programme recommendations in the Showcase section, handpicked by Freesat's editorial team. The Freetime service will work with the Freesat app for smartphones and tablets, although not yet at launch. Also impending is the YouTube app, although you can still access the video app through Panasonic's smart TV portal.

The TX-50AX802B features advanced technology for faithful colour reproduction for 4K, displaying a brighter panel (a claimed 37 per cent more than 2013 models) while also ensuring deep black levels without compromising detail – all of which Panasonic claims surpasses the picture performance seen on previous Panasonic plasma screens.

The set includes the latest HDMI 2.0 and DisplayPort 1.2a connections for playing 4K content. It's also equipped with HDCP 2.2 and HEVC (H.265) coding that provides further future-proofing for 4K sources and streamed content, such as Netflix's proposed 4K streaming service.

Around the back, we also spied three HDMI inputs (for Full HD 1080p), three USB ports, an SD card slot, Freeview and Freesat tuners, and an ethernet port.

The two remotes supplied with the screen – a standard and a smart touch remote – have also been given a sleek redesign.

Also featured on the set are enhanced smart TV features, such as a spruced-up My Home Screen, a new MyStream sevice, and improved voice interaction. Read our CES 2014 report for more details on these features.

We'll bring you futher information and updates on this set, and the rest of Panasonic's 2014 TV range, when we get more details.

Freesat Freetime improves the free-to-air satellite service by adding on-demand content. It was launched in September 2012 and Freetime boxes now account for 40 per cent of all Freesat set-top box sales.

Craig Cunningham, Panasonic's TV product manager, says: "We've had a long standing relationship with Freesat and I'm really excited that we are the first manufacturer to have the Freetime service on our TVs."

Freesat has alreay had a strong start to 2014 following a positive fourth quarter in 2013 in which it added 31,000 new homes, taking its base to over 1.8 million.