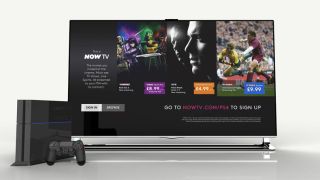 From today (July 24th), streaming service Now TV is available through your console and will let you access Sky Sports, Sky Movies and other Sky TV entertainment channels. The service has been available on PS3s since May 2013.

And the second announcement is confirmation that the system software update due for release "next week" will add 3D Blu-ray film support. The PS4 has been unable to support the format since it launched, but that's soon to be rectified.

First, the Now TV announcement. The PS4 is the latest platform to support the service, stealing a march on the Xbox One. Want to enjoy more than 800 films? You can get a Sky Movies Month Pass for £8.99 – after a 30-day free trial.

Gidon Katz, director of NOW TV, said: "We’re excited to be able to unveil yet another fantastic way to watch Now TV – offering the huge number of PS4 customers in the UK a contract-free and flexible way of watching great pay TV content on their television."

And just when we thought the Xbox One would get in ahead of the PS4 in offering 3D Blu-ray disc support, it seems as if Sony might just have wrestled back the initiative on that front with its system software update on the way next week.

We reported two days ago that Microsoft will be adding 3D Blu-ray support to the Xbox One – plus an ability to purchase games and add-on content using the Xbox SmartGlass app or online – in a system update that'll roll out in August.

But a tweet from the official PlayStation account said: "Coming next week: PS4 system software update 1.75 adds 3D Blu-ray film support". Does this mean the PS4 will get there first, or can the Xbox One lead the way in offering this feature?

MORE: PS4 vs Xbox One