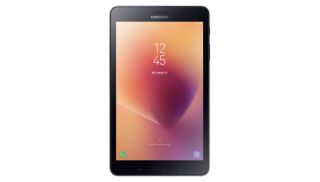 Ardent Terry Pratchett fans will recall, in his Discworld series, there's a takeaway restaurant called "Mundane Meals" - the owner looking for a word that meant "everyday" until he found one he liked the sound of.

Samsung seems to have taken a leaf from that book with its latest tablet, the Galaxy Tab A - an "everyday, versatile tablet [designed for] everyday use".

The 8in tablet is aimed to be family friendly. There's a 5000mAh battery (which apparently gives 14 hours of life) and 32GB of built-in storage (expandable up to 256GB with a MicroSD card).

You charge it using USB C, with the device running Android 7.1.1 Nougat - one step down from the latest Android 8.0 Oreo iterations.

For picture-happy kids (or adults) there's an 8-megapixel camera on the back and 5-megapixel version on the front.

Prices for Samsung's newest tablet start at $230 and, while there isn't a UK price right now (the tablet launches on 1st November) that roughly translates to £175.

When it comes to affordable tablets, Samsung might need to go even more budget to compete with its main rival, Amazon - the Fire tablets start at as little as £50 and are pretty impressive.

However, one advantage Samsung has is greater access to Google's technology, so those wanting a quick device for Chromecasting content to their television might find the new Tab A is what they're looking for.

Although ostensibly based on Android, Amazon's Fire OS doesn't allow for Chromecast support (and the two companies have been battling it out in other areas too).

While it's an "everyday" tablet when it comes to how you might use it, the Galaxy Tab A is part of a greater fight between competing ecosystems that still rages on...