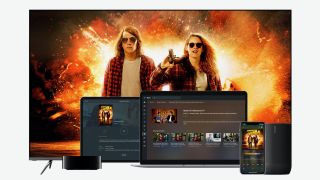 If you use Plex to stream your own media between devices, here's a little Christmas present for you: the service now offers a bunch of free films and TV shows to Plex customers around the world.

The content includes fare from big studios MGM, Warner Bros., Lionsgate and Legendary. The free films and TV shows, which include classics like Rain Man, Raging Bull, Apocalypse Now and The Terminator, will appear alongside your existing Plex library. Not interested? You can hide it from view.

The free content is available to anyone with a Plex subscription – not just those with the pay-for Plex Pass tier. The bad news? Plex Pass customers will still have to put up with ads, just like non-paying customers. That said, Plex says there will be about a third as many ads as you would see on a cable channel.

Plex will serve up recommendations based on your own content library. The firm promises to "deliver more content to more countries than any other free streaming service to date". A bold claim.

You can watch on any device that supports Plex, which includes Android and iOS smartphones, smart TVs, and streaming boxes like the Apple TV, Roku Streaming Stick+ and Amazon Fire TV Stick.

While some films and shows will be geo-restricted, the vast majority will be available worldwide. The service starts rolling out today.