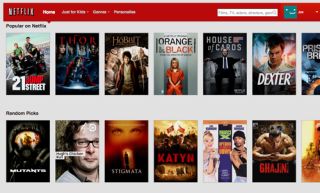 Netflix has launched 4K Ultra HD video tests in the US, ahead of a planned launch of 4K content in 2014.

Six films have gone live on Netflix offering a variety of stock video footage shot in 4K, as the company looks to make good on its CEO's promise to be "the big suppliers of 4K next year".

Of course, it'll be 4K TV shows and films that Netflix hopes to go big on in 2014, rather than slow-motion footage of bowls of fruit, as it plans to launch 4K content to consumers next year.

While we have seen the first Ultra HD TVs on sale in the UK in the last few months, the issue of content remains a large stumbling block.

Sony launched the Video Unlimited 4K download service in the US earlier this year but told whathifi.com back in July that it had no plans to bring the service in the UK.

Still, BBC, Sky and Sony have all been working in 4K broadcasts, and now it seems that Netflix is pushing for a viable consumer content solution.

Netflix has already flexed its muscles in the world of TV and film production, debuting the in-house produced House of Cards this year, and now it looks like the company aims to push things forward in the world of 4K TV, too.