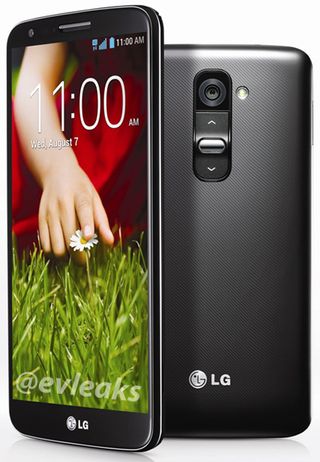 LG has officially launched its new flagship smartphone, the LG G2. The G2 is the first of the company's new G Series of premium mobile devices and claims to be "the first smartphone on the market to feature 24-bit/192kHz Hi-Fi playback".

The G2 release date or price for the UK hasn't been confirmed but LG has said the phone will be rolled out to various countries "in the next eight weeks".

Aside from high-res audio support, that stand out feature is the "Rear Key" concept, i.e. all the buttons are on the rear of the device, with nothing on the front or sides. Intriguing.

The 3,000 mAh battery sounds similarly impressive and it's available in 16 and 32GB storage incarnations. Two cameras are on board, as you'd expect, with a 13MP back camera and 2.1MP front camera. The G2 also supports 4G LTE, though we'd imagine this would be network dependent.

But it's that hi-res music playback that has most interested. Obviously with Android devices you can drag and drop any file from your computer but previously hi-res file playback hasn't been supported. Similarly, iTunes for iPhones doesn't support hi-res. We look forward to getting our hands on the phone for review...

And it seems the leaked pictures below, were right...

LG G2 pictures have leaked ahead of the event, alongside an official image from LG. Two images of the upcoming G2 were released by the evleaks Twitter account in the early hours of August 6th.

The first (above) purports to be a face-on pic of the smartphone and the second (below) revealed the phone's back, showing the back-facing camera. Official G2 images? We shall see. You can watch the New York launch event streamed live right here in the YouTube video above.

Rumours suggest the LG G2 could have a 5.5in, 1080p screen, though inital rumours surrounding a fingerprint sensor look to be unfounded.

Other 'G' mobile devices are set to follow the G2, while the Vu range, which includes 4:3 aspect phones, and is largely confined to Asia and the US, will continue alongside other existing LG phones.

The G2 is LG's latest attempt to challenge the best smartphones around, a landscape dominated by the likes of the iPhone 5, HTC One and Samsung Galaxy S4.

The top tier of mobiles has so far eluded LG, but for its involvement in the Nexus 4, the Google phone which was built by LG.

"Our vision is to make LG’s newest G devices synonymous with excellence, raising the bar even further for the ultimate in user experience," said Dr. Jong-seok Park, president and CEO of the LG Electronics Mobile Communications Company.

"The new G2 will build upon the excellent reputation established by previous G Series products.”