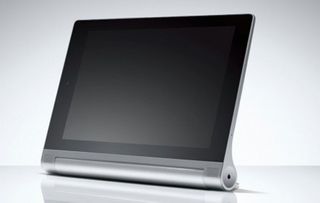 The new device has been designed in partnership with Hollywood A-lister Ashton Kutcher, with a range of features packed on board to entice customers who like their media on the move.

MORE: Read all our Lenovo reviews and news

A built-in Pico projector, for example, will let you transform your living room wall into a movie or TV screen, with the projector able to achieve a 50in projection if placed 2m from the surface.

Meanwhile, Lenovo is claiming a world first for a tablet after including an 8W sound system and subwoofer – complete with Dolby Audio and Wolfson Master Hi-Fi sound technologies as well.

Jeff Meredith, vice president of Lenovo's Mobile Business Group, said: "The Yoga Tablet 2 Pro is the culmination of the most extensive research and feedback we’ve ever undertaken.

"We’ve preserved the best features of the original Yoga Tablet – the modes and the long battery life – and now we’ve raised the bar completely with technologies like the projector."

Kutcher added: "Our vision for the Yoga Tablet 2 Pro was to create the best tablet on the market. To do that, we really looked at how people use tablets and what they needed for a better experience."