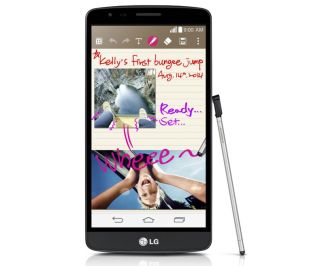 The G3 Stylus follows the recent introduction of the G3 Beat and G Vista, and comes with many of the premium features found on the South Korean tech giant's flagship G3 device. There's no word regarding UK and European availability at this point, however.

Its 5.5in qHD display has the same Floating Arc tapered edges and thin bezels as found on the G3, while its Rubberdium stylus pen has been designed to fit comfortably in the hand and allows "effortless" use when drawing or writing on screen.

A 1.3GHz quad-core processor, 1GB RAM and a removable 3,000mAh battery are also among the features of the Android 4.4.2 KitKat-powered device, with Brazilian consumers due to be the first to get their hands on the G3 Stylus next month (September).

Both variants come with 4K and LG's proprietary WRGB OLED screen technologies combined into one curved form factor, together with Colour Refiner and True 4K Engine Pro. It'll also handle the H.265 and HEVC H.265 codecs from a content perspective.

Hyun-hwoi Ha, president and CEO of LG’s Home Entertainment Company, said: "As the next evolutionary step in display technology, OLED will play a major role in reshaping our industry. I feel confident when I say that 4K OLED is a bona fide game changer."

MORE: Ultra HD 4K TV: everything you need to know