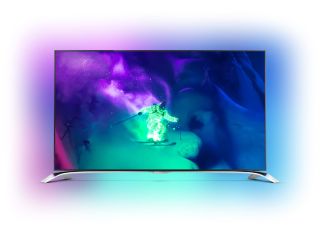 Here, then, are the Philips/TPVision headlines from IFA 2014 in Berlin: three new Ultra HD 4K TVs. A wider, more diverse range of screens powered by Android. The inevitable curved offering. Plus something a bit more real-world and affordable.

The range-topper is the 9800 4K TV. It was actually launched a couple of weeks ago but, given that it features four-sided Ambilight, 4K resolution and Android power, it’s well worth a mention here.

Just beneath that is the 9100 range (55in and 65in models, the bigger screen pictured above). Again featuring four-sided Ambilight, again powered by Android and again 4K, it’s bundled with what looks a very promising wireless subwoofer. It’s a bold-looking set.

MORE: Read all our Philips reviews and news

MORE: Ultra HD 4K TV - reviews, news and everything you need to know

Is the jury out on curved TVs? Or is the jury just stringing it out to try and get an extra night in a hotel a la Homer Simpson? Either way, Philips/TPVision is taking no chances – and so here’s the 55in 4K 8900. Android-powered, naturally, and with Ambilight on just the three sides this time. Undoubtedly something to do with the curve.

It seems peculiar to talk of a 4K TV as the sensible, affordable option, but the 7900 is a 49in and 55in model range with two-sided Ambilight and what the company claims is class-leading upscaling to fill all those many millions of pixels on its Ultra HD panel.

Prices for all models are yet to be confirmed.