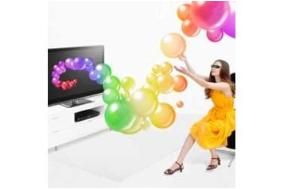 Sharp has confirmed the release of its first 3D TV, the Quattron LE925E. Available initially only as a 60in TV, it will retail for £3500.

Sharp has announced it will launch its own internet TV service, called Aquosnet+, in partnership with Philips.

And the company is working with Warner Bros on 3D film releases in the UK – we assume it will be bundling 3D discs with certain products.

On the manufacturing front, Sharp says its new Green Front Sakai factory is the size of 12 Wembley stadiums and can produce a whopping 432,000 panels a month.

Sharp is also an official partner for Euro 2012, and other forthcoming UEFA events.

Sharp Electronics is set to unveil its first ever 3D TV at IFA Berlin today. The company will launch a 3D Quattron TV alongside its first 3D capable Blu-ray player.

The television will use Sharp's four sub-pixel technology, which adds a yellow sub-pixel to the traditional red, green, blue array.

Alongside the new TV will be the company's first 3D Blu-ray player, the BD-HP90S. With a slim design and 3D support, the player also has built in wireless functionality.

Sharp claims its TV technology makes its LCD TVs 1.8 times brighter than rival 3D TVs, and hopes this will make all the difference when watching 3D content, which often appears darker due to the 3D glasses.

We'll be reporting live from the press conference at midday (UK time) today, so follow whathifi on Twitter for all the details.