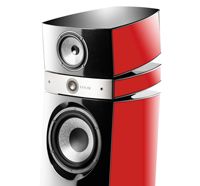 Selling for £18,999/pr, the new speaker came about in typical Focal manner: a dissatisfaction with the bass units used in the original Scala led to an engineering solution to make things better.

The 28cm W Cone bass unit, which uses a sandwich of glass fibre and foam layers in its diaphragm, was giving Focal some problems in production, with samples falling outside specification, so it was redesigned.

The mechanical connection between coil, coil former and cone was reinforced, improving break-up and boosting stereo focus, while the overall effect on the bass allowed a change in low-frequency tuning for better focus and stability at higher levels, and more low-end drive.

The new speakers are priced at the same level as the model they replace.