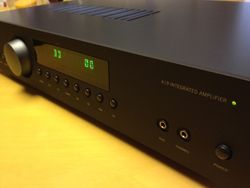 Following an exclusive product briefing with Arcam, we can now reveal details on two brand new products: the A19 stereo amplifier and the rBlink Bluetooth receiver.

Priced at £650 and boasting 50W per channel, the FMJ A19 will arrive in November. It’s a brand new design, based on the Cambridge company’s high-end FMJ platform.

The A19 features a headphone stage, which Arcam claims to be the equivalent to a £150 standalone headphone amp. And, such is the size of the headphone market, Arcam believes the amp is versatile enough to drive a wide range of models.

There’s a suite of analogue inputs for connecting external kit and the FMJ A19 also features a moving magnet (mm) phono stage for vinyl-lovers.

Uniquely at this price, the A19 has also been fitted with a snubbing filter, to prevent any connected speaker cable from turning into an antenna and attracting interference from any wireless networks in close vicinity.

Also of interest is the upgrade path offered by the A19. As well as the amp’s own power supply, there’s a second dedicated, internal power supply to drive products from Arcam’s own rSeries.

This means devices such as the Arcam rDAC, rPAC and the forthcoming rBlink can be powered using a 2.1mm power connector packaged with the amp.

rBlink and you’ll miss it

The second new product Arcam unveiled is the rBlink, a Bluetooth-toting wireless receiver, first shown at the start of the year but finally made official and due on sale next month.

It can handle standard Bluetooth streams but the rBlink also handles the superior aptX codec – good news for owners of compatible smartphones, such as the Samsung Galaxy S3 as higher bitrates can be streamed for theoretically superior sound.

As mentioned above you’ll be able to power it using Arcam’s new FMJ A19 stereo amp. But if you don’t own the amp, there’s always mains power.

We'll be getting our hands on the products in the next few weeks so look out for the full review treatment on both.