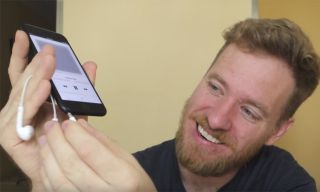 It's a year to the day since Apple revealed it had removed the headphone jack from the iPhone 7. But for many people, time has not been a healer. Indeed, a headphone jack remains, albeit perhaps a touch tongue-in-cheek, one of the most requested features for the forthcoming iPhone 8.

And now one - and we don't use this word lightly - hero, has completed an epic DIY experiment to add a fully-functioning headphone jack to an iPhone 7. And he's fairly sure, it's a world first.

The project has been completed by Scotty Allen, an ex-Google engineer who is now based in Shenzhen, China, and who previously built an iPhone from parts bought at Chinese markets.

Having settled on deconstructing an Apple lightning to headphone adapter to put inside the phone, Allen tears countless iPhones apart in his quest to shoehorn-in his beloved 3.5mm connection.

This involves moving existing parts, trimming-down new parts, and ultimately designing, manufacturing and shoving into place his own flexible circuit board. Did we mention this was a serious project?

What's more, after much soldering, drilling and breaking-of-screens, the board can even switch between the new headphone jack and Lightning connector, so both terminals are fully-functioning - as is the rest of the phone. "A labour of love" barely covers it.

We wholeheartedly recommend you watch the full video and admire the man's dedication, ingenuity and engineering talent - not to mention those of the various local experts he calls upon for assistance.

And if you're inspired, you can try it yourself - Allen has made his circuit board design available to the world, should you have the know-how to try your hand. We'd advise you tread carefully with that...

The video ends with a plea to Apple to make a new iPhone that ships with a headphone jack. Will he get his wish? We'll find out next week when Apple reveals its new iPhone(s)...