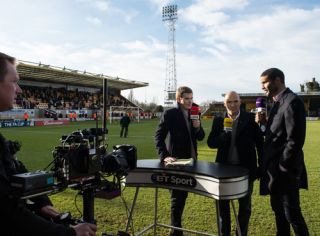 It appears that BT has become the latest sports broadcaster to throw its hat into the ring when it comes to the future distribution of ultra high-definition sports content in the UK.

According to the Telegraph, group CEO Gavin Patterson told a media and telecoms conference that its 4K proposals are being based on investment in faster internet speeds.

By spending £2.5bn on fibre optic cables, BT says it will be able to achieve the higher internet speeds needed to send Ultra HD pictures – four-times sharper than HD broadcasts.

Patterson was quoted as saying: "This year our Media and Broadcast business unit is trialling 4K resolution technology, which promises a new era."

BT has recently locked horns with Sky in the battle for sports rights, with the telecoms giant acquiring the rights to screen live Premier League football among other sports.

If its plans to broadcast sports in 4K TV come to fruition, it will be another area in which BT has gone up against Sky – which is already carrying out trials of 4K TV broadcasting.

And 4K doesn't look as if it will be the sole preserve of the pay-TV providers either, with the BBC also investigating the possibility of broadcasting sports in Ultra HD.

The Wimbledon 2013 tennis tournament saw the BBC undertake its own trials of 4K broadcasting in partnership with Sony, with the tech giant providing the camera and engineers.

However, the BBC seems to have conceded that Sky will beat the public service broadcaster in the race to adopt Ultra HD 4K technology – both companies are members of the UHD Forum.

BBC executive Mark Harrison told the Digital TV World Summit: "I’m sure that Sky will get there first in some – I don’t mean this in a pejorative way, but – attention grabbing 4K moment."