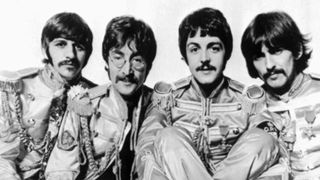 When talk turns to The Greatest Album of All Time, Sgt. Pepper's Lonely Hearts Club Band generally features in the conversation. And as May 26th (the 50th anniversary of the album's release) approaches, Apple Corps and Universal Music are readying the mother of all super-deluxe reissues to further cement the record's position as one of the few truly game-changing releases of the rock'n'roll era.

Apple has gone to town on Beatles reissues before now, but the all-encompassing nature of forthcoming Sgt. Pepper options takes the retrospective angle to another level altogether.

MORE: The Beatles back catalogue lands on streaming services

A splendid time is guaranteed for all

At the entry level, there's a new stereo remix of the album (from the original masters) by Giles Martin and Sam Okell. Then there's a two-CD or double-vinyl version, featuring the new stereo remix plus previously unreleased, complete, alternate takes of all 13 album tracks. The twin-CD package also includes a previously unreleased instrumental take of Penny Lane and two unreleased takes of Strawberry Fields Forever.

The real treasure-trove, though, is the six-disc tour de force. Naturally enough it includes all the aforementioned material, and also includes another 33 recordings from the Sgt. Pepper sessions (mostly previously unreleased, mixed from the four-track session tapes and sequenced in the order in which they were recorded).

It also includes a direct transfer of the album's original mono mix, unreleased mono mixes of several songs from the sessions plus what Apple Corps is calling "the lost version of Lucy in the Sky with Diamonds" and the Capitol Records mono mix of Penny Lane.

It's rounded off with 5.1 mixes on Blu-ray and DVD, a restored version of 1992's The Making of Sgt. Pepper documentary and promo films for several songs. And a 144-page hardback book, two posters, and a replica of the orginal album's cardboard cut-outs of sergeant's stripes and military moustaces.

May I enquire discreetly...?

As it stands, the Super Deluxe six-disc box-set reissue of Sgt. Pepper's Lonely Hearts Club Band can be yours on pre-order from Amazon for £141.