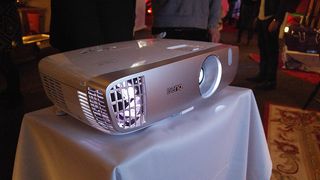 BenQ has become a go-to brand for big-screen entertainment on a budget – its W1080ST+ recently bagged a What Hi-Fi? Award at £1000, just as its W1400 model did last year.

Hoping to continue its success at this popular price bracket, BenQ is prioritising colour accuracy with its two pricier models. Under its new ‘Cinematic Colour’ umbrella, the W2000 and W3000 are calibrated to Rec. 709 colour space – an industry-wide, universally accepted standard for high-definition TV – for accurate colour reproduction ‘as the film director had intended’.

BenQ says that in order for every projector to meet the standard, the angle and coating of the colour wheel had to be considered, as well as software optimisation and quality control.

With short-throw under their belt, the trio of projectors can deliver a 100in image from 2.5m, with zoom and vertical lens shift onboard for flexible positioning. The W2000 and W3000 also offer side projection, while the big-daddy W3000 adds horizontal keystone adjustment alongside improved optics and picture processing for enhanced motion and colour performance.

The projectors can also connect to your HDMI sources – a Blu-ray player or Sky box – wirelessly via an optional add-on kit (£200).

Sound quality hasn't been left behind either. The W1100, W2000 and W3000 all feature built-in speakers with audio enhancement processing powered by MaxxAudio for a more immersive experience, as well as four preset sound modes and EQ adjustment.

We'll be taking a closer look - and listen - in our upcoming review.

While 4K projection isn't yet a reality for the brand, a spokesperson for BenQ hinted that it will unveil a high-end laser projector with an 8000 lumen output at ISE next February, coincidentally where Epson announced its first-ever laser projector earlier this year.