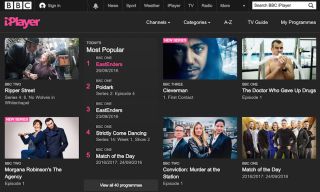 The BBC aims to reinvent its iPlayer catch-up and on-demand service, taking a leaf out of Netflix's book.

One possible feature could be the ability to download entire series before they air on TV. This would let viewers binge-watch Sunday night drama series like War and Peace, rather than waiting for each instalment to be broadcast weekly.

Binge-watching has been crucial to the success of services like Netflix and Amazon Prime Video. The BBC has previously made series like Peter Kay's Car Share available to view on iPlayer before being broadcast on TV.

BBC director-general Lord Hall will outline his vision in a talk to staff, the BBC reports. Hall will say he wants to "reinvent public broadcasting for a new generation".

"iPlayer was the biggest revolution of the last charter," says Hall. "Now we need to make the leap from a catch-up service to a must-visit destination in its own right."

As well as the new feature, Hall will highlight the importance of staying ahead of the curve in terms of technology, and will suggest that personalisation, artificial intelligence and voice control will all play their part in helping iPlayer stand out as the best service of its kind.

He hopes that by 2020, iPlayer will be the "number one online TV service in the UK".

Last year was the service's most successful to date, with 243 million monthly requests on average. But in order for Hall to meet his target, iPlayer will need double the number of people it reaches.

The service will also have an emphasis on 'slow news', featuring more in-depth analysis to complement breaking news.