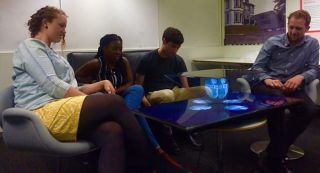 The BBC has created an experimental ‘holographic’ TV device that creates the illusion of floating images.

Based on a modern-day version of an old theatre technique, an acrylic pyramid was placed on a 46in television in order to make video footage appear to levitate within the pyramid.

Cyrus Saihan, the BBC’s head of digital partnerships, said that,“holographic experiences, like Ultra High Definition or virtual reality, offer audiences a level of detail and realism that only a short while ago seemed virtually impossible but that are now becoming a reality.”

Having watched the hologram TV, the audience members’ most popular suggestions for holographic content were nature documentaries and show live sport.

Unfortunately, this isn’t a technology we’re going to be seeing in your living room quite yet. There needs to be a fairly low level of light in the room to get the maximum impact of the effect, and the viewing angles are very narrow.

The hologram experiment is part of the BBC's work exploring "emerging technologies for future audiences", which included a theoretical paper on holographic techniques back in the 1970s, and comes at a time where AR and VR are threatening to change home entertainment.

Since we’ve already missed the deadline for holographic billboards advertising Jaws 19, as famously seen in Back To The Future 2, the What Hi-Fi? review team is happy to wait a little longer before we start reviewing holograms.

You can read more about the experiment on the BBC Blogs page.