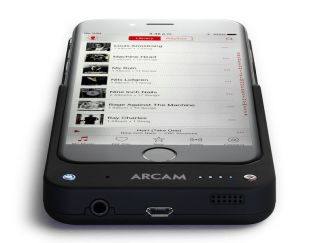 Hidden in the protective casework designed to fit around an iPhone 6, and weighing just 100g, the device is a combined headphone amp, DAC (digital-to-analogue converter) and battery pack.

Arcam says it delivers three times the power output of the standard iPhone 6, doubles its battery life and will enhance the sound quality whether you are listening to music stored on the phone or streaming from the likes of Apple Music, Spotify or Tidal.

MusicBoost extracts the digital audio signal from the iPhone's Lightning port, feeds it via a high-performance Texas Instruments DAC to the built-in amp and then out to headphones of your choice. It can play FLAC and WAV files using third-party software such as VOX and Flac Player+.

Charlie Brennan, Arcam's managing director, says: "With the MusicBoost, we have applied our serious audio engineering talents to the iPhone. The improved sound quality will make you want to listen to more and more music, and you get the added advantage of doubling your phone's battery life."

The rechargeable internal Lithium Polymer battery powers the amp and DAC as well as recharging the phone itself. Arcam claims you'll get up to 120 hours music replay in Airplane mode (ie with Bluetooth, wi-fi and 3G/4G switched off). Recharging of the MusicBoost is via micro USB using the supplied lead.

Arcam says it has no plans to make a MusicBoost for the larger iPhone 6 Plus. We will be testing the Arcam MusicBoost soon.