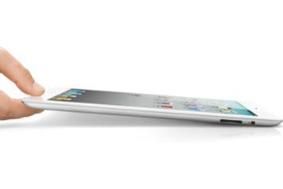 Apple has confirmed the UK pricing ahead of the release of the iPad 2 this Friday.

The iPad 2 goes on sale in the UK – and 24 other countries – this Friday following a record-breaking launch in the US two weeks earlier.

You can check out the iPad 2 in our dedicated blog.

7.15pm - Blog now online here with more pics and all the iPad2 details. We're off for a play, hopefully!

6.45pm Of course that video camera on the iPad2 means it gets Facetime, too.

Other iOS 4.3 enhancements include faster web browsing and being able to use an iPhone 4 as an internet hotspot for your laptop or iPad. So you could ditch your 3G dongle.... iOS 4.3 update due on March 11th.

New iPad2 is 33% thinner than original iPad - just 8.8mm thick, which is thinner than the iPhone 4. We'll get comparative pics soon.It weighs 1.3lb compared to 1.5 for first iPad. Comes in black or white.

As expected, there's a video camera. Also gyroscope as in iPhone 4.

iPad2 uses new Apple A5 dual-core processor - up to twice as fast CPU, but up to nine times faster graphics; all with same long battery life.

6.20pm Jobs says most of the new tablets are playing catch-up with the iPad... as Apple launches iPad 2.

6.15pm There are now 65,000 Apps tailored for the iPad (cue Jobs taking a dig at lack of Android tablet apps).

6.05pm Apple now has 200 million accounts across iTunes, App and eBooks Stores - all with a credit card attached. Steve Jobs reckons that makes Apple a bigger online retailer than Amazon. Impressive, if slightly scary fact there.

6pm And we're off.... Well, we've got a live link up with San Francisco, which is a start!

5.30pm Welcome to BBC TV Centre, where we're in our seats ready to bring you all the news from the expected launch of the Apple iPad 2 from 6pm.

Early reports are already buzzing around about the predicted specification of the new multimedia portable.

Amazon Germany apparantly briefly showed a pre-order page for the new iPad, complete with a 9.7in screen (not supersizing to 10.1in), camera, Thunderbolt and 1.2Ghz chip. On sale 17th March, for €499.

We'll see if that's real - and get UK pricing - shortly.

We'll be reporting live from today's Apple launch, at which the company is expected to announce the second incarnation of the iPad.

Doors open at 5pm at BBC TV Centre, with the event scheduled to start at 6pm UK time.

Keep an eye on the site for rolling news as it's announced, while you can also follow @whathifi on Twitter for more news and pictures from the event.

We've just had our official invite (see picture) to an Apple launch on March 2nd at BBC TV Centre in London, so it looks as if the rumours are true. We'll bring you all the news on the day.

The web is awash with speculation this morning that Apple's iPad 2 will be unveiled on March 2nd, although the company itself has – in its customary style – refused to comment.

Yesterday there were rumours that the launch had been delayed until June due to production bottlenecks.

But now, according to the Wall Street Journal's All Things Digital Blog, the launch event has been set for early March.

The iPad 2 is expected to be slimmer, lighter, have a better resolution than the first model, and have front- and rear-facing cameras for Facetime video chat support.

Some reports also suggest it will be powered by one of Qualcomm's multimode chips and will run on both GSM and CDMA-based networks around the world.