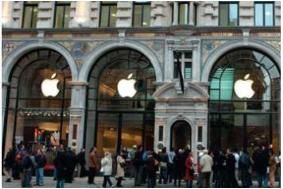 The store looks set to cover four floors of the building, though only two will be accessible to the general public, reports the London Evening Standard.

It's hoped the new store will ease pressure – and the infamous queues – at the company's Regent Street location (pictured), recently named as the most profitable store per square foot in London.

The Evening Standard reports the building has been painstakingly restored in recent months, with customers expected to enter through a lavish eight-bay arcade in to the glass-roofed building.

If you feel like joining the throng of people outside for the 10am opening on August 7th, you can at least expect the odd free gift for your time if previous Apple openings are anything to go by.

But surely the real question is will you be able to get any reception on your iPhone 4 once you're inside?