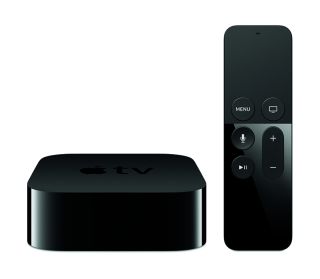 The new box promises "powerful hardware" complete with an A8 processor and Apple's brand new tvOS operating system, based on iOS.

Voice and gesture control feature heavily in the user experience, and both revolve around a new Siri Remote which boasts a glass, touch-sensitive surface and built-in gyroscope and accelerometer.

Press the Siri button and you can filter searches based on your personal preferences. The new Apple TV will search for content on iTunes and other apps such as Netflix and show you where it's available.

The Siri Remote operates via Bluetooth so you won't require line of sight to use it, while Apple claims a single charge (via its Lightning connector) should be good for three months use.

Apple Music is on board too, giving you full access to your music library as well as Apple's Beats 1 radio station.

However, there's no support for 4K video unlike on the new iPhone 6S and 6S Plus, and no indication you'll be able to stream Netflix's 4K content through their app.

tvOS is Apple's new operating system, based on iOS, and made to make it easy for developers to create new apps for the "big screen". Netflix, HBO and Hulu were all trailed at the Apple launch event, as well as a number of games, including some previously console-only games.

Apple has removed the optical output which existed on the previous version so you're now limited to HDMI and ethernet. Connect via HDMI and you'll be able to turn on your TV and cinema system via the Siri Remote.

The new Apple TV does now support Dolby Digital 7.1 via the audio output, an upgrade from 5.1 on the old box.