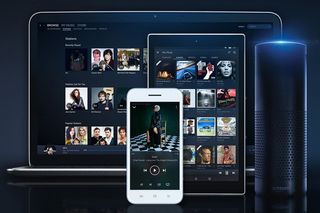 Amazon Music Unlimited, Amazon's Spotify rival, has launched in the UK. The service was previously available only in America. And the good news is that existing Amazon customers get a hefty discount.

Nevertheless, Amazon has a long way to go to catch Spotify's 40 million customers. It's hoping that cheaper tariffs for existing Amazon customers will sweeten the deal.

Customers with an Amazon Prime subscription can nab Amazon Music Unlimited for £7.99 a month, a discount of £2. They can also take out an annual subscription for £79, which would work out at £6.58 a month.

But it gets even cheaper if you own the Amazon Echo or Echo Dot, Amazon's personal assistant-cum-speakers.

Owners of these devices can sign up for just £3.99 a month, though it will mean they can stream only from Amazon Music Unlimited to that Echo or Echo Dot speaker. Still, if you're okay with that, there are huge savings to be had.

To get this reduced rate, you'll have to place your order via voice command from an Echo or Echo Dot.

Amazon Music Unlimited also lets you pick songs using voice controls, if used from an Echo speaker. Ask for 'sad indie music from the 90s', for example, and Amazon will serve some up. You can also get more specific, and request 'Oasis songs from before 1997' or 'happy Radiohead songs'.

Plus, you can ask for a song based on its lyrics. Amazon Music Unlimited stands above Amazon Prime Music, Amazon's two million track-strong service that's free for all members of Amazon Prime.