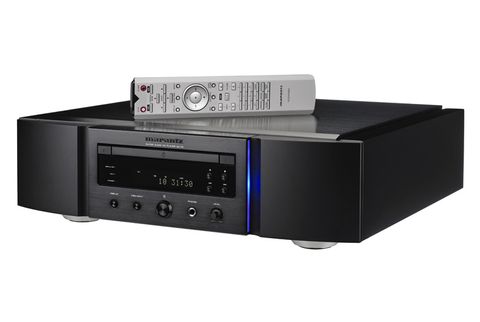 The SA-10 is one of the best digital source components around, and by high-end standards it’s aggressively priced

In our experience, Marantz’s top-end disc players have a tendency to become the stuff of hi-fi legend.

Those with long memories will remember the superb CD-94 of the late 1980s and the CD-15 that followed it, or more recently, the revered CD-7. The company doesn’t often produce top-end disc players, but when it does they are usually done right. So it proves again with the SA-10.

Notice we say disc rather than CD player, as the SA-10 also reads SACDs and music stored on DVD-ROMs. File compatibility from disc is impressive, ranging from 24-bit/192kHz FLACs and DSD128 all the way to ALAC, AIFF and MP3s.

In the past, Marantz would have secured a high-end transport from its then parent company Philips, but now (thanks to a shortage of quality OEM options) it has chosen a more difficult path and developed its own.

The all-new SACD-M3 transport is a considerable investment for the company, and is designed to read the music data off the disc as accurately as possible the first time around. Don’t be surprised to see versions of this transport filter down the company’s range in years to come.

It’s not just the transport that is new. Marantz has taken the opportunity to revise the entire signal path and come up with a new digital-to-analogue section too.

The company calls its system Marantz Music Mastering, and it incorporates elements of the single-bit conversion that it has used in the past, but with new filtering techniques and up-conversion.

Take a look inside the product and it’s hard not to be impressed by the quality of the construction and care taken in the layout. It all looks so neat and tidy.

Marantz has long been a master at getting the most out of its circuits and here you’ll find the use of high quality components and extensive shielding combined with sophisticated power supply arrangements. This may be an expensive product, but it’s obvious where the money has gone.

We’re equally impressed by the casework. It’s beautifully worked, feeling immensely rigid, well damped and superbly finished. This player weighs in at just over 18kg, which is heavier than some premium amplifiers.

The front panel controls feel nice too and the disc drawer glides with grace – so much better than the rather agricultural efforts used on some of the competition.

Marantz includes a system remote with the player. While the wand is packed full of buttons it still feels nice to hold and use. This handset is way more luxurious than most of those we see supplied with high-end products.

The SA-10 has plenty of connectivity. Disc drive aside you can access the player’s internal digital-to-analogue circuitry through USB (type B), coax and optical digital inputs.

Or you can play music from a USB memory stick or Apple device through a USB type A connecter. If you’re using an iPhone though, the Marantz can’t handle anything after the original 6 and 6 Plus.

We can’t complain about file compatibility, which goes up to 32-bit/384kHz PCM and quad DSD for the USB (B) input and 24-bit/192kHz for everything else. In short, it should accept pretty much any file type you use.

The analogue outputs are the usual pairing of singled ended RCAs and balanced XLRs. If possible, use the balanced connections, as they sound bolder and obviously more dynamic than the single-ended option.

Those who love to tweak will have fun with the SA-10. You can adjust the amount of dither added to the signal during digital-to-analogue conversion (three settings), alter the type of noise shaping applied (four options) and change the digital filter used (choice of a symmetrical response or one with short pre-ringing/longer post ring).

It takes a while to work through these, and for the most part the differences are subtle enough to come down to taste and system matching.

After a great deal of listening, we stick with the default dither and noise shaping functions and end up swapping between the filter settings depending on the recording. We also turn off the digital output, headphone amplifier and display to enjoy a touch of extra clarity.

A product such as this positively demands a high quality system. We use our usual reference set-up of Gamut D3i/D200i pre/power and ATC SCM50 speakers for the most part, though do swap in the SA-10’s partnering amplifier, the PM-10 (review coming soon) as well as Spendor’s mighty Classic 200 floorstanders.

Our resident Macbook Pro loaded with Pure Music software is the source for the USB (Type B) input while an iPod Touch feeds the USB (Type A). A Cyrus CDi is our optical source.

We start with CD in the form of John William’s Saving Private Ryan OST and the Marantz does a great job. It has a wonderfully clean presentation, sounding as though distortion levels are exceptionally low.

There’s a stunning amount of detail and it’s organised with care and composure. We’re struck by the way the Marantz renders the instrumental texture and the subtlety with which it tracks small-scale dynamic changes.

This player doesn’t hold back as the orchestra builds, delivering plenty in the way of scale and authority. We’re pleased with the solidity of the presentation and with the way it never sounds cluttered or stressed.

This is a wonderfully refined performer – one that has a sweet and smooth disposition yet enough in the way of bite to satisfy.

The Marantz’s ability to float a stereo imaging is equally impressive with the SA-10 casting a wide, deep and spacious soundstage populated with securely located instruments.

That composure we mentioned earlier makes itself felt here, as things remain stable even when the piece becomes more demanding.

Moving to a SACD of Eric Bibb and Needed Time’s Good Stuff shows a notable improvement in detail levels and subtlety, which makes us regret that the format never made the kind of impact its performance justifies.

Here the Marantz’s smooth tonality works perfectly, making the most of Bibb’s rich, textured vocals and tight backing band. The SA-10 has a wonderfully fluid way with voices, sounding confidant and natural.

Rhythmically, it’s surefooted rather than overtly enthusiastic, but still manages to convey the changing momentum of the music well.

The good news continues through the digital inputs where the Marantz’s blend of detail, finesse and smooth tonality work well across a broad range of music from Nick Cave’s atmospherically charged Push The Sky Away (16-bit/44.1kHz) right through to Michael Jackson’s Thriller (24-bit/176.4kHz) and Han’s Zimmer’s The Dark Knight Rises (24-bit/192kHz).

Even the headphone output is good. Marantz has put considerable effort into getting this to perform well and it does, mirroring the line level output’s clean, refined and engaging sound.

The SA-10 not only has a dedicated volume control for headphones – essential, really – but also has a range of gain settings to help headphone matching.

We’re in no doubt that the Marantz SA-10 is a brilliant digital source component and one of the finest disc players we’ve come across.

It’s very well made and has the kind of unfussy disposition that allows it to sound right at home across a wide range of systems. Highly recommended.