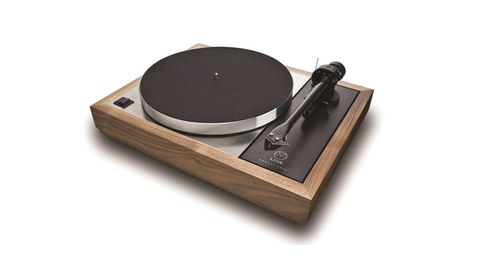 If there were such a thing as a hi-fi Hall of Fame, Linn's LP12 would be in it. It built an almost religious following in the '70s and '80s and is still considered one of the best turntables around.

As with any product that relies on top-quality engineering and British manufacture, the LP12's price has crept up markedly over the years. The top-spec version knocks on the door ?of 10 grand. Clearly, there's space for a cheaper starting point, and that's where the Majik fits in.

The great thing about this deck is that it's a proper LP12. The plinth, bearing and suspension are exactly the same as on any other LP12.

Money has been saved by using a simpler power supply, a Pro-ject 9cc tone arm rather than one of Linn's own, and by making the lid a £140 optional extra.

A tricky turntable to set-up
Set-up is best left to the dealer. This is no plug-and-play product, and performance is easily affected if everything isn't adjusted just so.

Once working properly the Majik is a pleasure to use, although 45rpm play requires the fitting of a pulley adaptor. Those who switch between albums and singles regularly will, quite rightly, be annoyed.

There's no escaping the feeling of quality though: the wooden plinth is beautifully made and all the metalwork is superbly machined.

The LP12 is a fully suspended design, but if you want the best performance you'll need a light, but rigid, support placed well away from the speakers so that the sound energy from the speakers has less chance of disturbing the delicate stylus/record interface.

The LP12 remains a fine-sounding deck. It has a distinct character – one of a relaxed warmth – but this never goes as far as taking the fire out of Nirvana's Nevermind or curtailing the Beatles' energy on Revolver.

Impressive sense of composure
There's plenty of authority on tap, but perhaps most impressive is the deck's composure: it's unstressed, even when facing something as complex as Carmina Burana. That's something only a few of Linn's rivals manage.

If you were after the last degree of transparency, we'd point towards the likes of Thorens TD160 HD or Michell's Gyrodec SE, but they don't have the Linn's easy-going fluidity, so it's a case of picking your priorities.

Remember too, this deck is readily upgradeable – better power supplies, upgraded sub-chassis and more elaborate arms and cartridges are all available.

No product stays in production for well over 30 years without being that little bit special. The LP12 is special and the Majik package is a great way of buying into its legend.