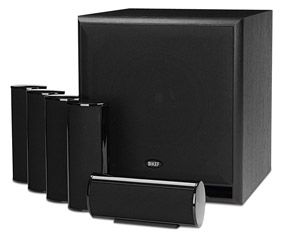 Likeable and accomplished, but the competition is feral just now

In July 2011, KEF’s attractive little KHT1505 was on the receiving end of a five-star First Test, tipping the need for this group test from ‘pressing’ to ‘urgent’. But now it finds itself shorn of its fifth star – so we have some explaining to do.

The KHT1505 consists of five identical, vaguely tubular satellite speakers (each designed to be positioned vertically or horizontally), so you’ve a total of five 19mm aluminium tweeters and five 50mm midrange drivers.

These go with a slab-sided subwoofer with 200W of power to propel its front-facing 20cm driver. As far as looks, build quality and finish go, the KEF is right on the money.

Chucked in at the deep end with the Dolby TrueHD soundtrack to The Dark Knight, the KHT1505 displays poise and vigour in equal measure.

Its soundstage is quite expansive, but unified and well integrated, and it sites effects with confidence. It’s adept at atmosphere too, from barely-there effects to full-scale dynamic outbursts, and the handover between speakers and subwoofer is nigh-on imperceptible.

Loves to go loud
Bass is taut and relatively speedy, though not short of impact, and the KEF has an unblinking willingness to go as loud as you dare.

Unlike many rival packages, the KHT1505 does without a bespoke centre channel.

That’s a bold move, given how critical the middle speaker is when listening to movie soundtracks, but the KEF just about pulls it off – though in an ideal world dialogue would be even better separated and more explicit.

There’s also a minor, but definite, smoothing of the very top of the frequency range: this helps the KEF be adaptable with partnering equipment and room positioning, but it doesn’t help the centre channel in its quest for projection.

The 1505 retains the bulk of its poise and focus when playing in stereo, as a listen to Arvo Part’s Cantus in Memory of Benjamin Britten confirms.

The sub’s speed is doubly welcome here, and again the system proves accomplished at reaching and maintaining an atmospheric pitch. Only the belt’n’braces rounding-off of the highest frequencies makes it into the ‘demerit’ column.

Price competition is tough
So far so really very good, then. About the only note of caution we sounded in July's First Test concerned the strength of the competition the KEF faces – and it’s a further change in that competition that’s seen the KHT1505 lose its fifth star.

When we made our appraisal in July, Canton’s Movie 125 MX cost the same and offered very similar value for money. Now, the Canton’s a whole £100 cheaper – and is therefore even better value.

We’d still implore you to hear the 1505 before you make a decision but, as we said, it’s not short of admirable rivals.