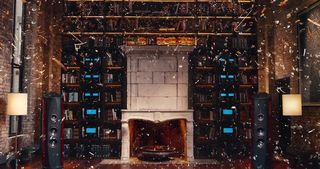 It has always been our mission on What Hi-Fi? to keep things real world and affordable, which is why we concentrate most of our reviews on products at the lower and middle part of the price spectrum.

But each month we do cover the high-end in our Temptation section, where price is not an issue. We realise most people can’t afford those products but, like admiring a Ferrari or Lamborghini, it’s nice to dream.

If you’re looking for a company that has made an impact in high-end hi-fi in recent years, then World of McIntosh (WOM) is a good place to start.

Born out of the Fine Sounds Group, which bought Italian speaker specialist Sonus Faber in 2007, the companies that now come under the WOM umbrella read like a Who’s Who of high-end hi-fi: McIntosh, Audio Research, Sonus Faber, Wadia, Sumiko and most recently Pryma.

You can see the timeline of how the group came together in the panel below, suffice to say that under the leadership of CEO Mauro Grange it has made a determined push to expand its portfolio, culminating in a management buyout with LBO France and Yarpa in 2014.

“We don’t want to change our DNA, but we do want to move forward,” says Grange. “In this journey we will never forget who we are.” That DNA is summed up as “history, craftsmanship and quality”.

McIntosh Labs, which gives its name to the group as a whole, was founded in 1949 and Audio Research in 1970, so there’s plenty of heritage there. Sonus Faber was born in 1983 in Italy, while Wadia was formed more recently, in 1998, by a team of engineers from the 3M Corporation - and, like McIntosh, is based in Binghamton, USA.

The latest addition to the portfolio is Pryma, a luxury headphone brand with sound by Sonus Faber launched last year.

It’s clear WOM is on an expansion drive, and more widespread economic challenges not withstanding, the company is convinced the market for high-end hi-fi remains robust.

But it is not oblivious to the changes in consumer behaviour, and the fact that for most people today their music is either streamed or stored on a smartphone, tablet or laptop. That led to the creation of the Pryma ‘lifestyle’ headphone range, and most recently the unveiling of the extraordinary looking Sonus Faber SF16 all-in-one hi-res wireless music streaming system.

Even here though the company drew on its heritage: the concept for the SF16 was derived from the famous Sonus Faber ‘snail’ speaker system from 1980. A central body houses the Class D amplifier and front-and rear-facing bass drivers, while the extending arms contain the midrange drivers and tweeters. It’s a highly unusual design, and likely to remain rare as only 200 will be hand made each year, selling for a cool £9900 each.

“It was a huge challenge to develop this crazy idea, it was the tallest mountain to climb,” says Paolo Tezzon, head of R&D at Sonus Faber. “Initially I saw a large number of problems to solve. The real problem was to keep all the basic qualities of traditional hi-fi, but reduce the complexity of the product for the customer and make it a plug-an-play solution.”

Price is another area where the WOM brands do things differently: they are unashamedly expensive, luxury products and Audio Research’s recent release of a “more affordable” Foundation range of electronics, at just under £7000 each, gives a clear indication of where it sees its position in the hi-fi market.

Audio Research knows that it needs to attract new customers to the brand, and argues that it can only create an “entry-level” range of products if it keeps prices high on the rest of the range.

It’s worth noting that even at $5500, McIntosh describes the MVP901 as a “bridge” product because, although it upscales standard Blu-rays to 4K, it is not (yet) a full fat 4K Ultra HD player. The implication is that a proper 4K UHD player will come later.

However, there are signs that WOM has its eye on products with more real world prices as well. New kid on the block Pryma unveiled its first range of headphones, with sound by Sonus Faber, last year with prices starting from £380.

“Pryma is a new brand, so the rules are different,” says Livia Cucuzza, who heads the WOM Design Lab. “We are working in fashion, creating a luxury lifestyle product, it is something you wear. We need to build a new brand image, which is a big challenge for us.”

“Around 2.3 billion people own a smartphone, and 40 per cent of them use their phone to download and stream music,” adds Natascha Klein, vice-president of sales and marketing at WOM’s lifestyle division. “By the end of 2016 sales of headphones globally will reach $30bn, and $70bn by 2022. We want to tap into that market."

Cucuzza and his team are also working on a range of McIntosh lifestyle products, including headphones and smaller speakers. The McIntosh RS100, one of our Stars of CES 2016, is a case in point: it is the company’s first small, wireless speaker to feature DTS Play-Fi technology, and can be used as part of a multi-room streaming system. A bigger version of the RS100 is on the cards too.

The adoption of DTS Play-Fi is another sign of the times: Ron Cornelius, McIntosh’s product manager, says the technology offers high-res streaming (up to 24-bit/192kHz) that’s in keeping with the brand’s image, and points out that 20 companies now support Play-Fi, including hi-fi stalwarts Arcam, Rotel and Polk.

Music streaming services such as Spotify, Tidal, Deezer and Amazon Music are already incorporated into Play-Fi, and Cornelius says Qobuz and Napster will be added in Europe later this year.

Reaching new customers is about more than just new products though. To that end, the company has created its first World of McIntosh flagship townhouse in New York, and more are planned in 2017, including one in London. “Customers want a different retail experience,” the company says, and that’s why it has spent a small fortune on kitting out its NY townhouse, an invitation-only showcase for all the products in the WOM portfolio.

It doesn’t stop there. It has also built its first World of McIntosh "experience centre” in Ann Arbor, Michigan, and hopes to roll out the concept in other states.

This is retailing at the high end, and a clear sign that WOM is selling a lifestyle as much as the technology it makes. Volume sales are not its game. To put that into perspective, McIntosh has so far sold 500 units of the MX150 surround sound processor, launched last year at a price of $14,000 (£10,500) each. Sales of the new Audio Research Reference 6 stereo preamp (£12,000) stand at 300 units since December 2015. And as for Sonus Faber, it has been on a steady growth curve, selling 5000 pairs of speakers in 2009, rising to 9000 pairs in 2015, while Pryma has sold 6000 pairs of headphones since they were introduced in December 2015.

What’s next? Well at a recent press launch there was a hint of new products to come from Wadia, but no specifics. More WOM “experience centres” are planned across the globe (but none yet planned for the UK), and there will be a new Foundation series power amp from Audio Research this autumn, followed by a Foundation stereo integrated amp in 2017. Whatever happens, it’s clear the WOM group is not resting on its laurels.