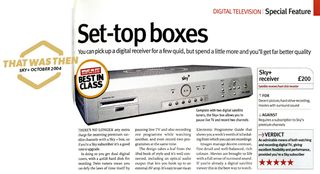 Back in 2004 the original Sky+ box was a revelation. While the standard box gave access to Sky’s impressive range of premium content (provided you were happy to pay the less-than trivial subscription fee), the + box added recording capability.

While the ability to record programmes was hardly new – we’d already had VCRs for a couple of decades – the ease of use certainly was.

Here was a simple way to save programmes that didn’t depend on setting a recorder’s timer or finding a suitably empty VHS tape to use.

If programmes didn’t start or end when you expected, as they often don’t, the software took care of things. Never again would you miss a penalty shoot-out because your recording stopped at the end of normal time (in theory).

It says much about this early box that even current Sky users would find a great deal that’s familiar. It had clear menus, intuitive operational logic and a well-designed remote control – all areas in which the service still excels today.

A 40GB hard drive may not sound impressive – most modern boxes tend to have at least 1TB to play with – but with standard-definition broadcasts not needing anywhere near the space of full HD, let alone 4K, material, it wasn’t a major issue.

The main video connection was analogue in the form of Scart. HDMI didn’t get a look-in until the HD version of this box arrived in the middle of 2006.

Fast-forward to today’s Sky Q and it’s obvious things have improved. We can record more channels than ever before, and stream those recordings seamlessly between TVs, phones and tablets. Picture quality has benefited from 4K and will soon enjoy HDR with a forthcoming software upgrade.

While the sound has also moved forward from the stereo of Sky+, it has remained faithful to Dolby Digital longer than we’d like. That said, Dolby Atmos is on the Sky roadmap.

The Q remains easy to use considering its range of capabilities, and still does what Sky boxes always tend to do – deliver premium content at a premium price in a fuss-free way.